Scale models are physical models of an object or system. We usually build them to represent something that is much larger or much smaller than they are. Scale models are proportional to the original object. When scaling an object to a smaller size, we scale every part of the object by the same ratio. If a dinosaur is being reduced to 1/8 its original size for a museum display, his head, his feet, and his body will all be reduced to 1/8 their original size. 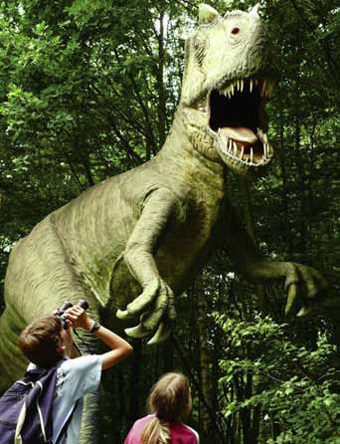 Sometimes it's possible to build a full-scale model. Allosaurs roamed North America 150 million years ago. Though they averaged 30 feet (8.5 meters) in length, scientists believe some were as large as this 39-foot (12-meter) model.

Say you divide all three dimensions by 100. Your scale model would be 8 feet high, 1 foot long, and 2 feet wide. That's a pretty big model. It might be useful for a prop in a play, but you might have wanted something smaller that you could place on a desk or in a shoebox diorama.

You might decide on a scale where 100 feet = 1 inch. To make a scale model of the original building, you would divide all measurements by 100 and change feet to inches. 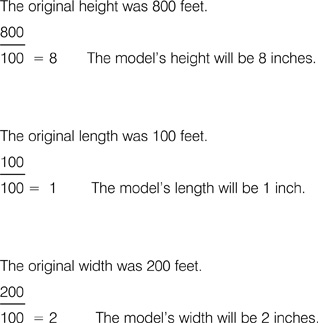 Your final model is still scaled to the original building, but it is now small enough to use in a diorama.
Note: If you are using metric measurements you are using the same formula.