The Importance of Wetlands

Wetlands are important to the Earth in many ways. They produce a great variety of grasses, trees, and flowers. Many of these plants provide food and shelter for the birds, amphibians, reptiles, and insects that live in the wetland year-round, as well as the migratory birds who use the wetlands for their breeding and resting grounds.

Many species of fish rely on estuaries, salt marshes, and coastal areas for their spawning grounds.

Reptiles, like the red-eared slider, are cold-blooded. They get their warmth from the Sun. 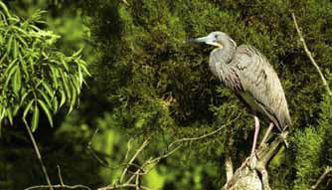 Blue herons make their nests in trees or bushes near water. 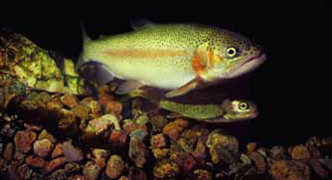 Rainbow trout are members of the salmon family. Adults weigh about 8 pounds (3.6 kilograms) on average, but can grow to as much as 53 pounds (24 kilograms).

Wetlands are important to the Earth's health. They act as reservoirs for runoff water during periods of heavy rain. When rain and snow sink into the ground, they are stored beneath the wetlands. This groundwater is an important source of drinking water, especially for people living far from lakes or rivers.

Wetlands also act as filters, removing impurities from the water that passes through them. As water moves through, the wetlands filter out excess nutrients and pollutants. These substances will eventually be absorbed by new living things. 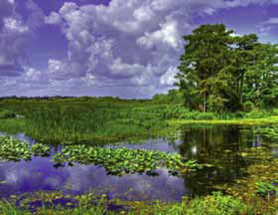 Wetland plants are adapted to growing in wet soil with little oxygen.

Many animals make their homes in and around the river. Alligators share the brackish waters with both freshwater and saltwater species of fish. Bald eagles and ospreys fly overhead. And in winter months, manatees take advantage of the warm water flowing from the river's natural springs. 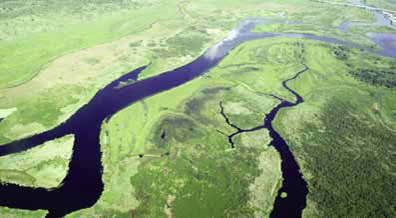 Wetlands serve as a buffer when a hurricane, typhoon, or tsunami hits a coastal area. The mangrove forests that grow in wetland areas stabilize shorelines, protecting them from the waves and wind that accompany extreme weather.

On December 26, 2004, a devastating tsunami struck southern Asia. In Sri Lanka, an island country off the coast of India, two villages came through the disaster with far different results. Only two people died in one of the villages, while almost 6,000 died in the other. The World Conservation Union credits mangrove forests with saving those lives. Mangroves, which grow in brackish coastal waters, protect the coastline from erosion, and can protect communities from typhoons, hurricanes, and tsunamis.

Researchers say healthy mangrove forests can absorb 30-40 percent of the destructive force of a tsunami. Since the 2004 disaster, mangrove forests are being restored in many coastal communities to protect against future tsunamis.

Wetlands are vital to the condition of our planet. They produce food and shelter for animals, filter and store water, protect shorelines from tropical storms,and reduce erosion from floodwaters. 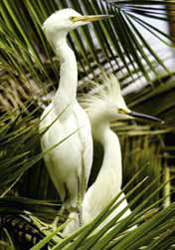 Besides providing food for the many animals that live there, wetlands also provide great varieties of food for humans. Estuaries give us shellfish such as crabs, clams, oysters, and shrimp.