Unicode is a character-encoding system used by computer systems worldwide. It contains numeric codes for more than 120,000 characters from 129 languages. Unicode is designed for backward compatibility with older character-encoding standards, such as the American Standard Code for Information Interchange (ASCII). It is supported by most major web browsers, operating systems, and other software.

To improve the ability of computer systems to interoperate, a standard encoding system was developed. Released in 1963 and revised in 1967, the American Standard Code for Information Interchange (ASCII) encoded ninety-five English language characters and thirty-three control characters into values ranging from 0 to 127. However, ASCII only provided support for the English language. Thus, there remained a need for a system that could encompass all of the world's languages. 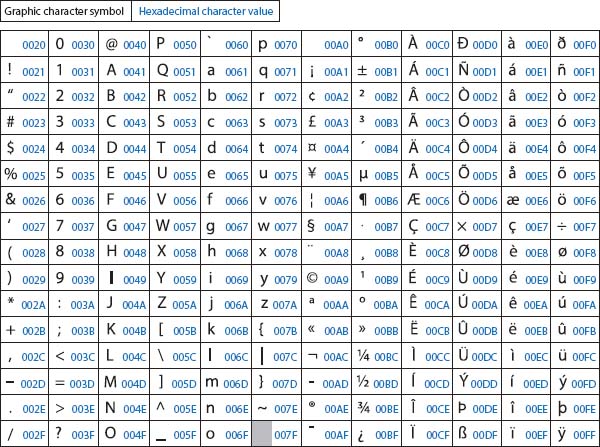 The Unicode Standard is a universally recognized coding system for more than 120,000 characters, using either 8-bit (UTF-8) or 16-bit (UTF-16) encoding. This chart shows the character symbol and the corresponding hexadecimal UTF-8 code. For the first 127 characters, UTF-8 and ASCII are identical.
UNDERSTANDING THE UNICODE STANDARD

The Unicode standard encodes graphemes and not glyphs. A grapheme is the smallest unit used by a writing system, such as an alphabetic letter or Chinese character. A glyph is specific representation of a grapheme, such as the letter A rendered in a particular typeface and font size. The Unicode standard provides a code point, or number, to represent each grapheme. However, Unicode leaves the rendering of the glyph that matches the grapheme to software programs. For example, the Unicode value of U+0041 (which represents the grapheme for the letter A) might be provided to a web browser. The browser might then render the glyph of the letter A using the Times New Roman font.

Unicode defines 1,114,112 code points. Each code point is assigned a hexadecimal number ranging from 0 to 10FFFF. When written, these values are typically preceded by U+. For example, the letter J is assigned the hexadecimal number 004A and is written U+004A. The Unicode Consortium provides charts listing all defined graphemes and their associated code points. In order to allow organizations to define their own private characters without conflicting with assigned Unicode characters, ranges of code points are left undefined. One of these ranges includes all of the code points between U+E000 and U+F8FF. Organizations may assign undefined code points to their own private graphemes.

Using a hexadecimal character chart as a reference, translate the following characters into their Unicode code point values:

Then select an undefined code point to store a private grapheme.

A private grapheme may be assigned any code point value within the ranges U+E000 to U+F8FF, U+F0000 to U+FFFFF, and U+100000 to U+10FFFD. These code points are left undefined by the Unicode standards.

Since its introduction in 1991, Unicode has been widely adopted. Unicode is supported by major operating systems and software companies including Microsoft and Apple. Unicode is also implemented on UNIX systems as well. Unicode has become an important encoding system for use on the Internet. It is widely supported by web browsers and other Internet-related technologies. While older systems such as ASCII are still used, Unicode's support for multiple languages makes it the most important character-encoding system in use. New languages, pictographs, and symbols are added regularly. Thus, Unicode remains poised for significant growth in the decades to come.