In 1975 communications researchers Charles Berger and Richard Calebrese developed the uncertainty reduction theory (URT). Their objective was to understand how two individuals communicate with each other during an initial encounter. They believed that when two strangers meet for the first time, the situation is fraught with uncertainty and vagueness. Hence, each individual attempts to lessen the ambiguity about the other person and their interpersonal relationship. Berger and Calebrese characterized two types of uncertainty that individuals encounter during an initial meeting: cognitive and behavioral. Cognitive uncertainty relates the observer's impression of the other person. Behavioral uncertainty relates to the actions a person will take. The researchers believed that the two types of uncertainties can be reduced with self-disclosure, especially as more frequent interactions occur between the individuals. 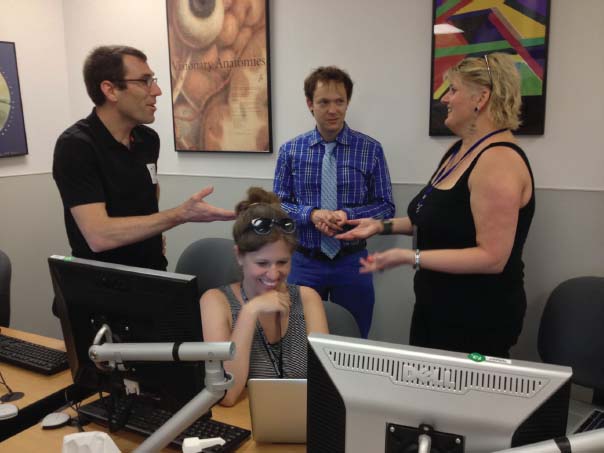 Mirroring, as shown in the openhanded gestures here, is the subconscious imitation of another. It can reduce uncertainty and produce a greater sense of engagement and belonging.
OVERVIEW

URT provides strong predictions in many situations for determining whether strangers will become friends or not.

Berger and Calebrese noted that when individuals first meet someone, they have three antecedents that help them reduce uncertainty. These antecedents are whether or not the other person has the potential to reward or punish, whether or not the other person behaves contrary to normal expectations, and whether or not the person expects further encounters with the other person. Individuals will use three strategies in order to defeat their uncertainty. These include passive strategies (unobtrusive observation), active strategies (means other than by direct contact), and interactive strategies (engaging in conversation). Berger later found that in conversation, individuals tend not only to seek information from a new acquaintance but also to formulate a plan for navigating the situation and to “hedge,” or couch their messages in humor, ambiguity, disclaiming, or discounting.

Social scientists have examined URT in new relationships in such varied contexts as schools and businesses, romantic partnerships, and technology-mediated interactions including watching television or using a computer for communication. Some theorists maintain that uncertainty can be either positive or negative for the participants in an interaction or a relationship, particularly if reducing that uncertainty might harm one or the other individual.

Berger, Charles R., and Richard J. Calabrese. “Some Explorations in Initial Interaction and Beyond: Toward a Developmental Theory of Interpersonal Communication.” Human Communication Research 1.2 (1975): 99–112. Print.

Ramirez, Artemio. “The Effect of Interactivity on Initial Interactions: The Influence of Information Seeking Role on Computer-Mediated Interaction.” Western Journal of Communication 73.3 (2009): 300–25. Print.