The Turing test is a game proposed by computer scientist and mathematical logician Alan Turing in 1950 to determine whether machines can think or at least simulate a thinking human well enough to fool a human observer. Despite criticism, the test has shaped the development and study of artificial intelligence ever since. 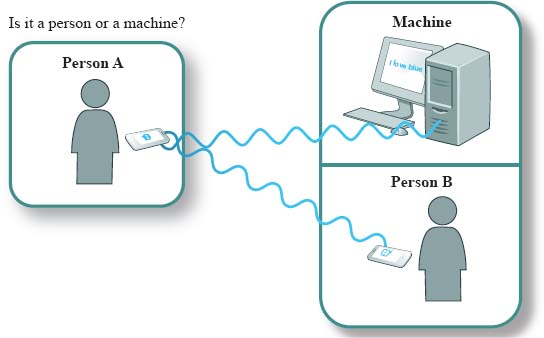 The Turing test of artificial intelligence should allow person A to determine whether they are corresponding via technology with a human or a machine entity.
CAN MACHINES THINK?

In 1950, British mathematician Alan Turing (1912–54) wrote a paper titled “Computing Machinery and Intelligence” in which he asked, “Can machines think?” The question was too difficult to answer directly, so instead he thought up a simple game to compare a machine's ability to respond in conversation to that of a human. If the machine could fool a human participant into believing it was human, then it could be considered functionally indistinguishable from a thinking entity (i.e., a person). This game later came to be known as the Turing test.

In Turing's time, digital computers and automata already existed. However, the notion of developing machines with programming sophisticated enough to engender something like consciousness was still very new. What Turing envisioned would, within the decade, become the field of artificial intelligence (AI): the quest for humanlike, or at least human-equivalent, intelligence in a machine.

To settle the question of whether machines can think, Turing proposed what he called an imitation game. He based it on a party game of the time, played by a man, a woman, and a third party (the judge). In the game, the judge stays in a separate room from the contestants and asks them questions, which they answer via writing or an impartial intermediary. Based on their answers, the judge must determine which player is which. The man tries to fool the judge, while the woman attempts to help him or her.

In Turing's game, instead of a man and a woman, the players would be a human and a machine. Computer terminals would be used to facilitate anonymous text-based communication. If the machine could fool a human judge a sufficient percentage of the time, Turing argued, it would be functionally equivalent to a human in terms of conversational ability. Therefore, it must be considered intelligent.

Later versions of the game eliminated the need for a human to compete against the machine. Instead, the judge is presented with a text-based interface and told to ask it questions to determine if he or she is talking to a person or a machine. This version has been the basis of the Loebner Prize chatterbot competition since 1995.

Turing's challenge spurred the development of a subfield of AI known as “natural language processing” (NLP), devoted to creating programs that can understand and produce humanlike speech. The 1966 program ELIZA, written by German American computer scientist Joseph Weizenbaum (1923–2008), was very convincing in its ability to imitate a Rogerian psychotherapist (“How does that make you feel?”). Programs like ELIZA are called “chatterbots,” or simply “bots.” These programs became a feature of early text-based Internet communication. With the advent of smartphones, both Apple and Google have developed advanced NLP to underpin the voice-activated functions of their devices, most famously Apple's AI assistant Siri.

CRITICISM OF THE TURING TEST

The Turing test has been a point of contention among AI researchers and computer scientists for decades. Objections fall into two main camps. Some object to the idea that the Turing test is a reasonable test of the presence of intelligence, while others object to the idea that machines are capable of intelligence at all. With regard to the former, some critics have argued that a machine without intelligence could pass the test if it had sufficient processing power and memory to automatically respond to questions with prewritten answers. Others feel that the test is too difficult and too narrow a goal to help guide AI research.

LEGACY OF THE TURING TEST

Despite objections, the Turing test has endured as a concept in AI research and robotics. Many similar, though not identical, tests are also informally called Turing tests. In 2014, sixty years after Turing's death, a program named Eugene Goostman made headlines for passing a version of the Turing test.

However, the Turing test's lasting contribution to AI is not its utility as a test, but the context in which Turing proposed it. With his proposal, Turing became the first major advocate for the idea that humanlike machine intelligence was indeed possible. Though he died before AI emerged as a proper field of study, his ideas shaped its development for decades thereafter.