Theory X and Theory Y are two models of human motivation developed by Douglas McGregor while he was working as a professor at the Sloan School of Management at the Massachusetts Institute of Technology. McGregor presented and explained the two theories in what is considered a classic work of management science, his 1960 book The Human Side of Enterprise. Theory X and Theory Y represent two basic assumptions about the human capacity for and relationship to work.

Theory X hinges on the assumption that humans are inherently work-averse. The workplace is therefore authoritarian in nature, with top-down pressure serving as the primary mechanism of motivation. Under Theory X, employees are assumed to have little ambition and avoid responsibility, preferring a secure, base work environment. Therefore, they require constant supervision and coercion to maintain productivity. Workplaces that follow the Theory X model of management often use continual prodding, strict quotas, the threat of discipline, and rewards for performance to keep productivity at a desired level.

Theory Y, however, is participatory, in that it believes that humans will work of their own accord in an effort to meet their individual needs for self-respect and achievement. There is no need, in this scenario, for oppressive supervision or the looming threat of discipline. Theory Y teaches managers to focus an employee's self-sustaining motivation in a way that helps achieve company-wide goals. One of the ways this energy can be harnessed, according to Theory Y, is by strengthening an individual employee's commitment to organizational objectives. People will work toward mutual objectives, Theory Y contends, only to the degree that the work fulfills their individual needs. 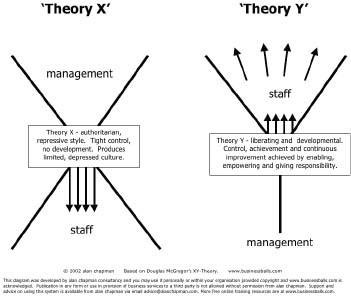 A comparison of Theory X and Theory Y.

Theory X and Theory Y depend on the traits of management leadership.

In Theory X, failure can be succinctly blamed on the inherent limitations of human resources. Theory Y spreads responsibility among a larger group of employees, and failure can only be blamed on a collective dysfunction and inability to overcome obstacles. McGregor believed Theory Y to be the model capable of motivating employees to reach their highest attainable level of achievement. Theory Y has emerged as the most popular model for management, particularly in the tech industry, where Internet giants such as Google and Facebook strike an employee-friendly, hands-off approach in the workplace that encourages individual creativity and self-realization.