“Signal processing” refers to the various technologies by which analog or digital signals are received, modified, and interpreted. A signal, broadly defined, is data transmitted over time. Signals permeate everyday life, and many modern technologies operate by acquiring and processing these signals. 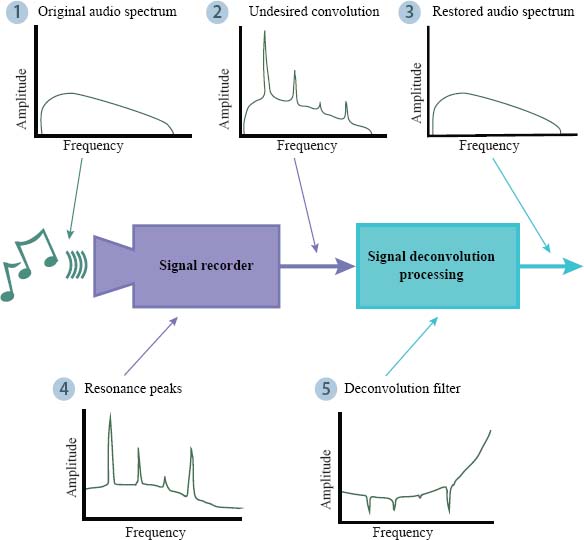 Signal processing involves sensors that receive a signal input (1). Programming to record the input may include deconvolution filters (5) to remove any undesired convolutions (2), such as harmonic resonance (4), so that the signal output (3) is restored.
DIGITAL AND ANALOG SIGNALS

One example of analog-to-digital signal conversion is the setup used to record a music performance to CD. The sound waves produced by the musicians’ voices and instruments are picked up by microphones plugged into a computer. The microphones convert the sound waves to analog electrical signals, which the computer then converts to digital ones. Each signal can then be processed separately. For example, the signal from the drum can be made quieter, or that from the guitar can be processed to add distortion or reverb. Once the individual signals are processed, they are combined into a single signal, which is then converted to the CD format.

The core concept in signal processing is the Fourier transform. A transform is a mathematical operator that changes how data are expressed without changing the value of the data themselves. In signal processing, a transform changes how a signal is represented. The Fourier transform allows signals to be broken down into their constituent components. It turns a single signal into superimposed waves of different frequencies, just as a music chord consists of a set of superimposed musical notes. The signals can then be quickly and efficiently analyzed to suppress unwanted components (“noise”), extract features contained in an image, or filter out certain frequencies.

In signal processing, a filter is a device or process that takes in a signal, performs a predetermined operation on it (typically removing certain unwanted elements), and outputs a processed signal. For example, a low-pass filter removes high frequencies from a signal, such as the sound produced by a piccolo, and leaves only the low frequencies intact, such as those from a bass guitar. A high-pass filter does the opposite. It removes low frequencies from signals, keeping only the high frequencies.

When processing digital signals, one important consideration is how the data should be stored. The discrete values that make up a digital signal may be stored as either fixed point or floating point. Both formats have advantages and disadvantages. A digital signal processor (DSP) is optimized for one or the other. Fixed-point DSPs are typically cheaper and require less processing power but support a much smaller range of values. Floating-point DSPs offer greater precision and a wider value range, but they are costlier and consume more memory and power. Floating-point DSPs can also handle fixed-point values, but because the system is optimized for floating point, the advantages of fixed point are lost.

Sometimes a signal contains encoded information that must be extracted. For example, a bar-code reader extracts the bar code from an acquired image. In this case, the image is the signal. It varies in space rather than in time, but similar techniques can be applied. Filters can be used to remove high spatial frequencies (such as sudden changes in pixel value) or low spatial frequencies (such as very gradual changes in pixel value). This allows the bar-code reader to find and process the bar code and determine the numerical value that it represents.

Signal processing is everywhere. Modems take incoming analog signals from wires and turn them into digital signals that one computer can use to communicate with another. Cell phone towers work similarly to let cell phones communicate. Computer vision is used to automate manufacturing or tracking. Signals are stored in CDs, DVDs, and solid-state drives (SSDs) to represent audio, video, and text.

One particular application of signal processing is in speech synthesis and analysis. Speech signal processing relies heavily on linear predictive coding, which is based on the source-filter model of speech production. This model posits that humans produce speech through a combination of a sound source (vocal cords) and a linear acoustic filter (throat and mouth). The filter, in the rough shape of a tube, modifies the signal produced by the sound source. This modification produces resonant frequencies called “formants,” which make speech sound natural but carry no inherent meaning. Linear predictive coding uses a mathematical model of a human vocal tract to predict these formants. They can then be removed for faster analysis of human speech or produced to make synthesized speech sound more natural.