Rational choice theory is at the heart of microeconomics, and despite the fact that it has received little empirical support in any field of academic inquiry, it continues to dominate economics and political discourse in many countries. Rational choice theory holds that human beings are unique in the world because they use reason to guide their actions rather than relying wholly on instinct as animals do. Numerous philosophers throughout the centuries have argued that reason is drawn from God, human nature, or some other source and explains why people will act in ways that are not wholly consistent with self-gratification. 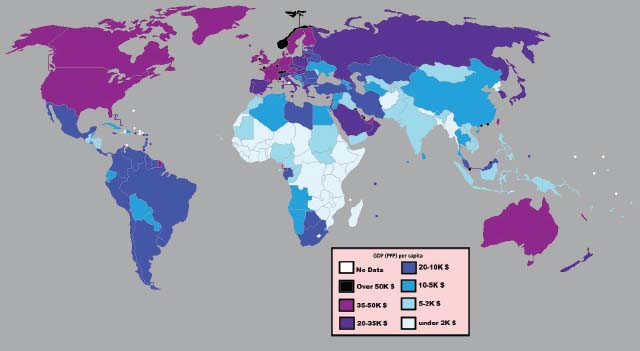 GDP per capita (data shown comes from Worldbank Data) income and resources have a direct impact on the kinds of choices an individual is able to make.
OVERVIEW

Rational choice theory explains why, for example, parents will sacrifice their time and efforts for the sake of their children, rulers will give up some ceremony in order to develop their holdings for the future, and children will forego play in favor of studying to obtain a better education and future prospects. At lower levels, of course, these actions are indistinguishable from those of animals. Where the rational choice theory differs is in supposing that people have agency over their actions and sovereignty over their decisions.

The agency aspect of rational choice theory involves both the ability to affect the future and the self-awareness that people have in their ability to change what will happen. It is possible to say that animals have the power to change future conditions, but they are not aware of this and do not use it to plan their behavior. Humans, on the other hand, are aware that they have different options available to them and will choose the option that they believe will maximize their returns, as measured by the concept of utility. Utility is a form of general purpose benefit that will be configured differently according to the inclinations or character of the individuals involved. Some people will have a preference for monetary gain, some for physical pleasure, and some for long-term security. The choices they make about how they behave will reflect these preferences.

The sovereignty aspect of rational choice theory indicates that people have the power to make these kinds of decisions. That is, they have the time and the resources to gather information about the different options, to assess reasonably accurately the likely outcomes of the various choices, and then to make their choices according to their own preferences (tastes and habits) and beliefs (perceptions about cause and effect). However, in real life, people most often have insufficient time and resources to accurately assess the possible results of their actions. Thus, they will routinize most decisions, repeatedly choosing an option that has provided an acceptable outcome in the past. Given the asymmetries of information that exist between providers and consumers, it is not surprising that people are rarely able to make accurate and rational choices. Even if they are able to calculate all their options in detail, numerous familial, social, cultural, and legal constraints exist that inhibit most people from behaving entirely according to their own desires and appetites. People for whom this does not apply are known as sociopaths.