Object-oriented programming (OOP) is a paradigm based on objects that are containers for the data and functionality. These objects work together to form the completed program. A class defines what properties an object has and what functionality it provides. The properties represent the object's state, which is stored in a field or variable. The functions, or methods, define the object's behavior. For example, an airplane object would have properties (states) such as wingspan, speed, weight, and color and have methods (behaviors) such as taxi, take off, climb, descend, turn, and land. The methods and properties that an object must make available for use by other components in the program are known as its interface. Related classes and interfaces are organized into groups called packages. 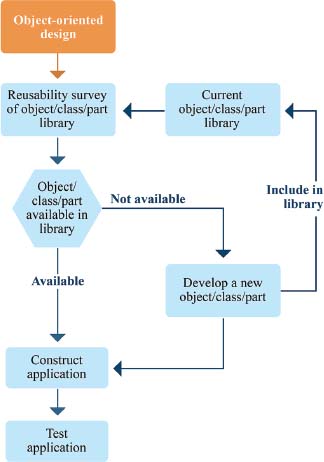 The benefit of object-oriented design lies in the reusability of the object database. Because each object has only one job, the code for an object remains applicable for any instance where the object is needed.

(OOPLs) are based on the OOP paradigm. There are different types of OOPLs. Pure OOPLs such as Java and Ruby are based solely on OOP. Hybrid languages, such as Python, are based primarily on the OOP approach but support elements of the procedural programming paradigm. The final type are procedural languages that have been extended to include OOP concepts, such as COBOL and Fortran.

OOPLs were designed to improve upon procedural languages. They allow greater modularity of code than do procedural languages. This makes it easier to prevent and correct problems within the program. OOPLs offer strong data integrity and data security because an object's methods and properties can be made private, or hidden. OOPLs work well with all types of data, unlike string-oriented languages, which are designed to work with strings of characters. OOP programs are also easy to extend as new features are needed. OOPLs also promote the reuse of code through inheritance. They are easy to scale and are a good fit for applications that need to adapt to future changes. OOPLs are good for projects where developers who work independently on very different systems need to collaborate with one another, as the details do not need to be shared or accessed by every developer.

The different types of OOPLs have different strengths and weaknesses. Pure languages offer the benefits of OOP while preventing the errors and inefficiencies that occur in procedural languages. However, they lack the ability to use procedural approaches when they would be the best choice. Hybrid languages offer the benefits of OOP while affording the programmer the flexibility to use certain procedural techniques when appropriate.

A developer is creating code that will be used to perform basic calculations like addition and multiplication. The following is an early version that only offers the ability to perform the addition of two numbers. 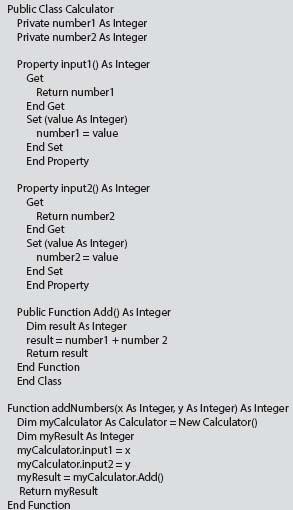 Identify the classes, instance variables, and methods within the code.

The first section of code defines a class, Calculator, that has two properties (input1 and input2) and one method (Add) that adds two numbers together and returns the result. Two variables are defined in the class, number1 and number2.

OOP offered a new programming paradigm that addressed many of the shortcomings of procedural and string-oriented programming. It also allowed the development of hybrid languages that gave programmers access to the best features of both approaches. OOPLs, both pure and hybrid, have become the most widely used languages and grown to dominate software development. The ability of OOPLs to incorporate other paradigms will likely allow them to remain relevant as new programming paradigms are developed.