Neuromorphic chips are a new generation of computer processors being designed to emulate the way that the brain works. Instead of being locked into a single architecture of binary signals, neuromorphic chips can form and dissolve connections based on their environment, in effect “learning” from their surroundings. These chips are needed for complex tasks such as image recognition, navigation, and problem solving. 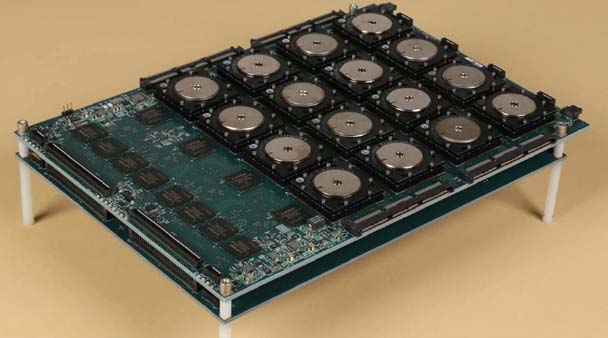 Neuromorphic chips are designed to detect and predict patterns in data and processing pathways to improve future computing. They simulate the brain's neuroplasticity, allowing for efficient abstraction and analysis of visual and auditory patterns. Each of the chips on this board has hundreds of millions of connections mimicking the synapses that connect neurons.

Neuromorphic chips have much in common with traditional microprocessor chips. Both kinds of chip control how a computer receives an input, processes that information, and then produces output either in the form of information, action, or both. The difference is that traditional chips consist of millions of tiny, integrated circuits. These circuits store and process information by alternating between binary “on” and “off” states. Neuromorphic chips are designed to mimic the way that the human body's nervous (neural) system handles information. They are designed not only to process information but to learn along the way. A system that can learn may be more powerful than a system that must be programmed to respond in every possible situation. Systems that can learn can function autonomously, that is, on their own without guidance. A good example of this is car navigation systems. These systems have to store or access detailed maps as well as satellite data about their current position. With this data, a navigation system can then plot a course. The neuromorphic chips may not need all of that background data. They may be better able to understand information about their immediate surroundings and use it to predict outcomes based on past events. They would function much the way someone dropped off a few blocks from home could figure out a way to get there without consulting a map.

THE LIMITS OF SILICON

One reason researchers have begun to develop neuromorphic chips is that the designs of traditional chips are approaching the limits of their computational power. For many years, efforts were focused on developing computers capable of the type of learning and insights that the human brain can accomplish. These efforts were made on both the hardware and the software side. Programmers designed applications and operating systems to use data storage and access algorithms like those found in the neural networks of the brain. Chip designers found ways to make circuits smaller and smaller so they could be ever more densely packed onto conventional chips. Unfortunately, both approaches have failed to produce machines that have either the brain's information processing power or its neuroplasticity. Neuroplasticity is the brain's ability to continuously change itself and improve at tasks through repetition. Neuromorphic chips try to mimic the way the brain works. In the brain, instead of circuits, there are about 100 billion neurons. Each neuron is connected to other neurons by synapses, which carry electrical impulses. The brain is such a powerful computing device because its huge amount of neurons and synapses allow it to take advantage of parallel processing. Parallel processing is when different parts of the brain work on a problem at the same time. Parallel processing allows the brain to form new connections between neurons when certain pathways have proven especially useful. This forming of new neural pathways is what happens when a person learns something new or how to do a task more efficiently or effectively. The goal of neuromorphic chip designers is to develop chips that approach the brain's level of computational density and neuroplasticity. For example, researchers have proposed the use of a memristor, a kind of learning circuit. To bring such ideas about, a chip architecture completely different from the traditional binary chips is needed.

Neuromorphic chips are especially suitable for computing tasks that have proven too intense for traditional chips to handle. These tasks include speech-to-text translation, facial recognition, and so-called smart navigation. All of these applications require a computer with a large amount of processing power and the ability to make guesses about current and future decisions based on past decisions. Because neuromorphic chips are still in the design and experimentation phase, many more uses for them have yet to emerge.

THE WAY OF THE FUTURE

Neuromorphic chips represent an answer to the computing questions that the future poses. Most of the computing applications being developed require more than the ability to process large amounts of data. This capability already exists. Instead, they require a device that can use data in many different forms to draw conclusions about the environment. The computers of the future will be expected to act more like human brains, so they will need to be designed and built more like brains.