A multi-user operating system (OS) is one that can be used by more than one person at a time while running on a single machine. Different users access the machine running the OS through networked terminals. The OS can handle requests from users by taking turns among connected users. This capability is not available in a single-user OS, where one user interacts directly with a machine with a single-user operating system installed on it. 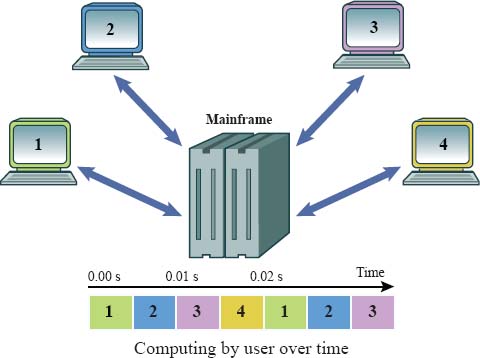 Multi-user operating systems are designed to have multiple terminals (monitor, keyboard, mouse, etc.) all connected to a single mainframe (a powerful CPU with many microprocessors) that allocates time for each user's processing demands so that it appears to the users that they are all working simultaneously.
MULTI-USER OPERATING SYSTEMS

A computer's operating system (OS) is its most fundamental type of software. It manages the computer system (its hardware and other installed software). An OS is often described as the computer's “traffic cop.” It regulates how the different parts of the computer can be used and which users or devices may use them. Many OS functions are invisible to the user of the computer. This is either because they occur automatically or because they happen at such a low level, as with memory management and disk formatting.

A multi-user OS performs the same types of operations as a single-user OS. However, it responds to requests from more than one user at a time. When computers were first developed, they were huge, complex machines that took up a great deal of physical space. Some of the first computers took up whole rooms and required several people to spend hours programming them to solve even simple calculations. These origins shaped the way that people thought about how a computer should work. Computers became more powerful and able to handle more and more complex calculations in shorter time periods. However, computer scientists continued to think of a computer as a centralized machine usable by more than one person at a time through multiple terminals connected by networking. This is why some of the earliest OSs developed, such as UNIX, were designed with a multiterminal configuration in mind. Given the nature of early computers, it made more sense to share access to a single computer. Only years later, when technology advanced and PCs became widely available and affordable, would the focus switch to single-user OSs.

One example of a multi-user OS is the software used to run the servers that support most webmail applications. These systems have millions or even billions of users who continually log on to check their messages, so they require OSs that can handle large numbers of users at once. A typical webmail application might require hundreds of computers, each running a multi-user OS capable of supporting thousands of users at once.

Many companies are moving back toward the use of multi-user OSs in an effort to contain costs. For a large organization to purchase and maintain fullfeatured computers for each employee, there must be a sizable investment in personnel and computer hardware. Companies seeking to avoid such expense find that it can be much more cost effective to deploy minimally equipped terminals for most users. This allows them to connect to servers running multi-user OSs. Backing up user data is also simpler with a multiuser OS because all of the data to be backed up is on the same machine. Therefore, it is less likely that users will lose their data and it saves time and money for the organization.