Mobile apps are programs designed to run on smartphones, tablets, and other mobile devices. These apps usually perform a specific task, such as reporting the weather forecast or displaying maps for navigation. Mobile devices have special requirements because of their small screens and limited input options. Furthermore, a touch screen is typically the only way to enter information into a mobile device. Programmers need special knowledge to understand the mobile platform for which they wish to create apps.

Mobile applications, or apps, are computer programs designed specifically to run on smartphones, tablets, and other mobile devices. Apps must be designed for a specific platform. A mobile platform is the hardware and system software on which a mobile device operates. Some of the most widely used mobile platforms include Google's Android, Apple's iOS, and Microsoft's Windows. Mobile devices support a variety of software. At the most basic level, a platform's system software includes its operating system (OS). The OS supports all other programs that run on that device, including apps. In addition to the OS, smartphones and tablets come with a variety of preinstalled utility programs, or utilities, that manage basic functions. Examples of utilities include a clock and a calendar, photo storage, security programs, and clipboard managers. While utilities are not essential to the functionality of the OS, they perform key tasks that support other programs. 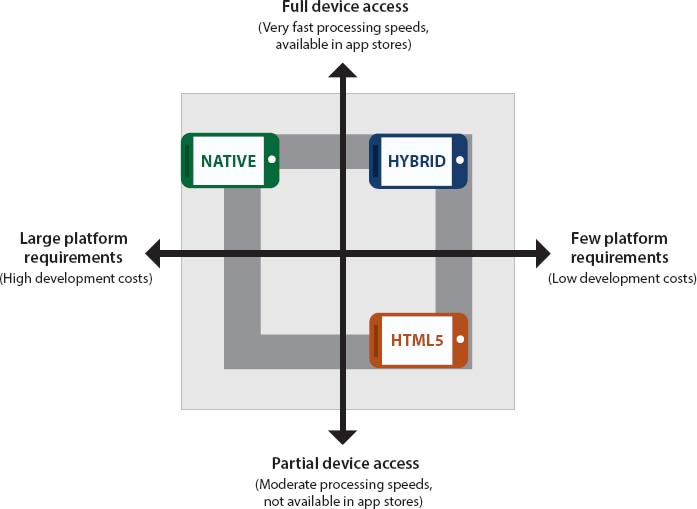 Native mobile apps and hybrid apps offer some features and capabilities unavailable with standard web programming, and they offer faster connectivity than is available with traditional computer software.

However, the real power of mobile devices has come from the huge assortment of mobile apps they can run. The app stores for various mobile devices contain hundreds of thousands of different apps to download. Each app has been designed with different user needs in mind. Many are games of one sort or another. There are also vast numbers of apps for every pursuit imaginable, including video chat, navigation, social networking, file sharing and storage, and banking.

Mobile apps have evolved into a multibillion-dollar business. Before the advent of mobile devices, software was developed for use on personal computers and a software package often sold for hundreds of dollars. The mobile app marketplace has adopted a very different model. Instead of creating apps that cost a large amount of money and try to provide a wide range of functions, the goal is to create an app that does one thing well and to charge a small amount of money. Many apps are free to download, and paid apps are typically priced anywhere from ninety-nine cents to a few dollars. Despite such low price points, developers of successful apps can still earn large sums of money. This is in part due to the large numbers of smartphone and tablet users.

Mobile apps also have a low cost of distribution. In the past, software was sold on physical media such as floppy disks or CD-ROMs. These had to be packaged and shipped to retailers at the software developer's expense. With mobile apps, there are no such overhead costs because apps are stored online by the platform's app store and then downloaded by users. Aside from the time and effort of developing an app, the only other financial cost to the developer is an annual registration fee to the platform's app store and a percentage of revenue claimed by the platform. App stores typically vet apps to make sure they do not contain malware, violate intellectual property, or make false advertising claims. App developers can earn revenue from the download fee, in-app advertisements, and in-app purchases. There have been several developers who have produced an unexpectedly popular app, catapulting them to fame and wealth.

Mobile apps can do much more than entertain and distract. For example, Twitter is a microblogging app that allows users to post short messages and read updates from others. Twitter has played a significant role in social movements such as the Arab Spring of 2011. Because it relies on telecommunications technology that continues to function even when there are disruptions in other media, the Twitter app has allowed people to communicate even during major disasters and political upheavals. Other apps allow users to report and pinpoint environmental damage or potholes for government agencies to fix.

Mobile apps must be designed for a particular mobile platform. Sometimes, a developer will make a version of an app for each major platform. In other cases, however, developers only create an app to run on a single platform. This leaves users of other mobile platforms unable to use the app. In the case of popular apps, this can cause frustration among those who want to be able to use whatever apps they want on their platform of choice.