A massive open online courses (MOOC) is an evolved version of distance and online education, both of which have been around in various forms for decades. Correspondence education dates back as far as the late nineteenth century, while computers and the Internet have been used in education since their earliest stages. As early as 1972, Athabasca University in Alberta, Canada was delivering distance education using print, television, and eventually online content to teach courses to national and international students. MOOCs promote independent learning by exploring a variety of learning possibilities in the digitally connected world. They enable access to a collective space where knowledge is constructed in a participatory, interactive, contextualized, and creative framework, made possible by free-of-charge, web-based, open-access online courses.

The term MOOC was coined by Dave Cormier, a professor at the University of Prince Edward Island, for a course designed and taught in 2008 by George Siemens and Stephen Downes. The course, Connectivism and Connective Knowledge, was offered for credit to a few registered fee-paying students, and free of charge with no credit to about 2,300 online students from the general public. Subsequently, MOOCs gained momentum as an increasingly popular form of education. Coursera, Udacity, and edX arose as three of the leading MOOC providers, collaborating and partnering with universities to offer course content to a broader array of students.

Coursera and Udacity, among others, used a commercial model, while edX was one of several nonprofit MOOC providers. Both models demonstrated the ability to draw in students, with Coursera attracting five million students and edX over 1.3 million by 2013. The market for MOOCs grew rapidly in 2012—called “the year of the MOOC” by the New York Times—and the phenomenon received prominent media coverage due to the potential disruptive impact on traditional education. By 2013, Coursera offered more than 300 courses in several languages from different disciplines (e.g., math, science, humanities, technology) instructed by professors at sixty-two universities and colleges around the world, including Stanford, Duke, and the Hong Kong University of Science and Technology.

MOOCs maintain some traditional schooling conventions, but they depart from these standards in significant ways. Characteristics such as course duration time and specified topics of interest are the same. Unlike regular courses offered by most universities, however, a MOOC is free, it provides access to open and shared content, and it requires no prerequisites other than an interest in learning, Internet access, and some digital skills. Most MOOCs do not offer formal accreditation, although some offer a certificate of course completion, generally for a fee. The most significant difference from traditional institutionalized education is the theoretical foundation for knowledge and learning. In terms of knowledge, for example, to a certain extent, MOOCs break away from the traditional practice of purchasing prepackaged knowledge from educational institutions and field experts. Instead, knowledge is facilitated by an instructor and freely constructed and negotiated among participants. Knowledge is “emergent” from the active engagement between participants and facilitators through dialogue and discussion. Learning occurs as a function of participation, engagement, and exploration in an online network that is distributed across participants, texts, blogs, articles, and websites. Some speculate that networked contributions may offer interdisciplinary information exchange that will expand to different fields, thus benefiting both learners and disciplines. 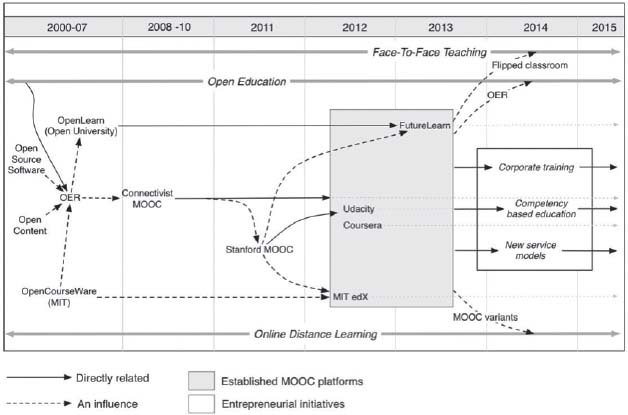 Displays a timeline of the development of moocs and open education with respect to various organisational efforts in the areas.

The MOOC concept can augment existing teaching and learning practices, and it has the potential to make education more attainable on a global level. It also models and reflects a commitment to lifelong learning by including learners in the knowledge-building process. However, not all learners benefit equally. Due to the massive numbers of enrolled students, the environment does not support individualized instructor attention and an individual learner's specific needs and abilities. Students with no prerequisite information or basic digital skills and those who are not intrinsically motivated may struggle in a MOOC, while others may be excluded completely given a lack of access to technology. Critics have claimed that while MOOCs aim to bring equal education to all populations, particularly internationally, studies have shown that most participants are from developed, Western countries and already have a college degree. Some observers also claim that by spreading the course content of elite universities, MOOCs many actually reinforce the homogeneity of higher education and limit cross-cultural transmission of knowledge.