A firewall is a program designed to monitor the traffic entering and leaving a computer network or single device and prevent malicious programs or users from entering the protected system. Firewalls may protect a single device, such as a server or personal computer (PC), or even an entire computer network. They also differ in how they filter data. Firewalls are used alongside other computer security measures to protect sensitive data.

In the early twenty-first century, increasing cybercrime and cyberterrorism made computer security a serious concern for governments, businesses and organizations, and the public. Nearly any computer system connected to the Internet can be accessed by malicious users or infected by harmful programs such as viruses. Both large networks and single PCs face this risk. To prevent such security breaches, organizations and individuals use various security technologies, particularly firewalls. Firewalls are programs or sometimes dedicated devices that monitor the data entering a system and prevent unwanted data from doing so. This protects the computer from both malicious programs and unauthorized access.

The term “firewall” is borrowed from the field of building safety. In that field it refers to a wall specially built to stop the spread of fire within a structure. Computer firewalls fill a similar role, preventing harmful elements from entering the protected area. The idea of computer firewalls originated in the 1980s. At that time, network administrators used routers, devices that transfer data between networks, to separate one network from another. This stopped problems in one network from spreading into others. By the early 1990s, the proliferation of computer viruses and increased risk of hacking made the widespread need for firewalls clear. Some of the advances in that era, such as increased access to the Internet and developments in operating systems, also introduced new vulnerabilities. Early firewalls relied heavily on the use of proxy servers. Proxy servers are servers through which all traffic flows before entering a user's computer or network. In the twenty-first century, firewalls can filter data according to varied criteria and protect a network at multiple points.

All firewalls work to prevent unwanted data from entering a computer or network. However, they do so in different ways. Commonly used firewalls can be in various positions relative to the rest of the system. An individual computer may have its own personal firewall, such as Windows Firewall or Macintosh OS X's built-in firewall. Other networked devices, such as servers, may also have personal firewalls. These are known as host-based firewalls because they protect a single host rather than the whole network. They protect computers and other devices not only from malicious programs or users on the Internet but also from viruses and other threats that have already infiltrated the internal network, such as a corporate intranet, to which they belong. Network firewalls, on the other hand, are positioned at the entrance to the internal network. All traffic into or out of that network must filter through them. A network firewall may be a single device, such as a router or dedicated computer, which serves as the entrance point for all data. It then blocks any data that is malicious or otherwise unwanted. Application-level firewalls, which monitor and allow or disallow data transfers from and to applications, may be host based or network based. 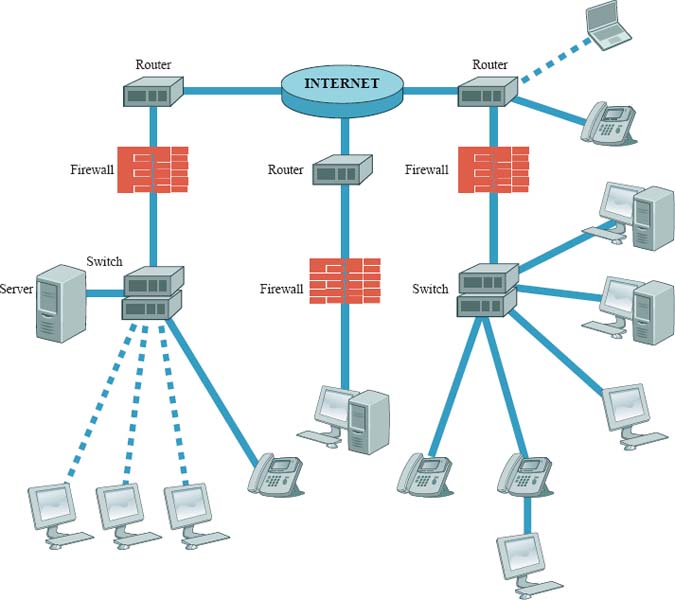 Firewalls are one of many protective measures used to prevent hackers from accessing computers or networks.

By preventing malicious programs or users from accessing systems, firewalls protect sensitive data stored in or transmitted via computers. They are used to protect personally identifying information, such as Social Security numbers, as well as proprietary trade or government information. Both the technology industry and the public have put increased emphasis on such protections in the early twenty-first century, as identity theft, fraud, and other cybercrimes have become major issues. In light of such threats, firewalls play an essential role in the field of computer security. However, experts caution that a firewall should not be the sole security measure used. Rather, firewalls should be used along with other computer security practices. These practices include using secure passwords, regularly updating software to install patches and eliminate vulnerabilities, and avoiding accessing compromised websites or downloading files from suspicious sources.

Ingham, Kenneth, and Stephanie Forrest. A History and Survey of Network Firewalls. Albuquerque: U of New Mexico, 2002. PDF file.