Error handling is the process of responding appropriately to errors that occur during program execution. Errors may be addressed using unstructured or structured programming techniques. Errors can be handled by automatically running alternative code to accomplish the same task or by informing the user or developer of the error, ideally allowing them to correct the problem causing the error.

HANDLING ERRORS IN A COMPUTER PROGRAM

Computer programmers and users are human, and mistakes may be introduced either in a program's code itself or through incorrect input or system requirements at run time. Errors occur when a computer program fails to compile, becomes unresponsive, fails to operate as intended, or terminates unexpectedly. Programs should be designed and written so that errors are minimized, but they must also deal effectively with the errors that do occur. Certain types of errors called exceptions, which occur during execution, may be anticipated in such a way that the program can respond appropriately. The process of finding and correcting errors is called debugging. Different techniques are employed to handle different types of errors when they are found. 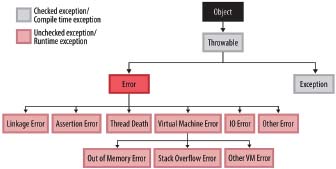 Syntax errors are errors that occur due to violations of a programming language's syntax, or rules governing how elements such as words and symbols are arranged. For example, if a language specifies that all strings must be enclosed in double quotes, the following line of code would generate a syntax error due to the use of single quotes:

Syntax errors prevent a program from compiling. Compiling is the process of converting computer code into a form that can be executed and used.

Logic errors occur when code is syntactically correct, so the program compiles, but the resulting program does not function as intended. For example, if a program is designed to display the names of all employees hired during the month of January but it displays the names of employees hired in February instead, a logic error has occurred. Proofreading, testing, and feedback are all important steps in finding and handling syntax and logic errors. Programmers also use software debugging tools to find and correct these errors.

Run-time errors are errors that occur when a program is in use. They are typically caused by the program encountering issues outside of its source code, such as invalid parameters in the larger computer system or incorrect data input. Run-time errors are not detected when a program is compiled, and they may cause a program to become unresponsive or terminate unexpectedly. Typical run-time errors include divide-by-zero errors and attempting to access a required file that has been deleted. The negative effects of run-time errors can be minimized through the use of error handlers, or sections of code designed to correct errors. Correction may involve running alternative code to accomplish the requested task. The program may also handle errors by informing the user and allowing them to resolve the problem.

While try/catch is an important technique, other methodologies can also be used to handle errors. Functions can use return codes to allow error conditions to be detected and dealt with. Guard clauses and data validation can be used to prevent errors from occurring by correcting error conditions automatically or by offering users the chance to correct errors before they occur.

The try block includes the code that may cause the error, and the first catch block contains the code that will run if a divide-by-zero error occurs. The second catch block is included because it is good practice to add code to handle any potential errors that do not have a dedicated error handler.

For a computer program to accomplish the purpose for which it was designed, errors must be detected, minimized, and handled appropriately. Computer programs that do not handle errors well suffer from unexpected failures and are frustrating to use. Programmers must anticipate the types of errors that may occur in their programs and develop code with error handling in mind. Failure to do so will limit the stability and usefulness of the software they create. As long as errors are possible, error handling will remain a critical part of computer programming.