A drone is a kind of aircraft. A drone is also known as an unmanned aerial vehicle (UAV). A drone is “unmanned” because it does not need a pilot on board to fly it. A person on the ground flies a drone. Some drones are guided by a remote control. Others are guided by computers. Some are flown by people thousands of miles away. Drones are available in different sizes and shapes. Many have cameras that take pictures or record video. The U.S. military has used drones since the mid-1990s. Since early 2013, many people have started flying drones for fun. So many people own drones that the government had to create rules for flying them.

Militaries have used unmanned aircraft for many years. During the Civil War (1861–1865), armies tried using balloons to drop explosives into enemy camps. The British Royal Navy created a drone-like vehicle in the 1930s. Pilots used it to practice their shooting skills.

The U.S. military began using modern drones in 1995. The military first used drones to collect information. For example, a drone could be used to find an enemy's hiding place. Unlike an airplane or a helicopter, a drone does not need a pilot on board. The people who fly drones can be thousands of miles away. For this reason, drones are safer to fly over dangerous areas.

The U.S. military later added weapons to drones. They began to use drones to perform drone strikes. During a drone strike, a drone fires its weapons at an enemy.

A few companies introduced drones for ordinary citizens in early 2013. People could buy their own drones for a few hundred dollars. Most of these drones are small—about the size of a textbook. They are not very heavy. These drones do not have weapons. However, some have cameras that take pictures or record video. People buy drones for many reasons.

Drones can be helpful. Farmers use them to check on fields and crops. Firefighters fly drones over forests to check for wildfires. Filmmakers may use them to record scenes in movies. Scientists may fly drones into big storms to gather information such as temperature and wind speed. 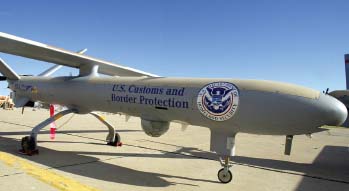 Unmanned aerial vehicles, more commonly known as drones, come in sizes ranging from a small toy to a large plane. They are used by the military for surveillance as well as by civilians for recreation.

People do not always use drones to help others. Some use drones to break the law. For example, people have tried to deliver items to prisoners in jail using drones. People have flown drones over baseball and football stadiums, which is not allowed. Someone even crashed a drone onto the lawn of the White House. The White House is where the president lives.

Drones have become very popular. However, they do cause some problems. Many people do not trust drones. They think drones will record what they do and say. They do not want drones to invade their privacy. When a person's privacy is invaded, others know about the person's private life.

Drones can cause property damage. Property is something owned by someone. Houses and cars are examples of property. Many people lose control of their drones while flying them. Drones may crash into people's houses or cars and cause damage. Out-of-control drones also can hit people and hurt them.

Another problem is that drones could collide with other aircraft. They could get sucked into a jet's engine. Such events could have serious effects, especially if a helicopter or an airplane crashes as a result. The government has created rules to prevent some of these problems.

The Federal Aviation Administration (FAA) is the part of the U.S. government that makes rules about flying. The FAA introduced rules for drones in 2015. First, people must register their drones. To register is to add one's name to an official list. The FAA then gives the drone owner an identification number. This number must be displayed on the drone. The following are more FAA rules for drones:

Do not fly a drone that weighs more than 55 pounds. If you put others in danger, you may have to pay a fine.

Anderson, Chris. “How I Accidentally Kickstarted the Domestic Drone Boom.” Wired (June, 2012). http://www.wired.com/2012/06/ff_drones/ . This article describes a number of drone uses as well as the author's recollection of building his own drone.

Bowden, Mark. “How the Predator Drone Changed the Character of War.” Smithsonian (November, 2013). http://www.smithsonianmag.com/history/how-the-predator-drone-changed-the-character-of-war-3794671/?no-ist . This article discusses the use of drones, particularly Predator drones, in war.

New York Times Editorial Board. “Ruling Drones, Before They Rule Us.” New York Times (January 10, 2016): SR10. http://www.nytimes.com/2016/01/10/opinion/sunday/drone-regulations-should-focus-on-safety-and-privacy.html?_r=0 . This article discusses the need for regulation of drones.

Ripley, Amanda. “Playing Defense Against the Drones.” Atlantic (November, 2015). http://www.theatlantic.com/magazine/archive/2015/11/playing-defense-against-the-drones/407851/ . This article discusses interactions with and reactions to drones in various places.

Suebsaeng, Asawin. “Drones: Everything You Ever Wanted to Know but Were Always Afraid to Ask.” Mother Jones (March, 2013). http://www.mother-jones.com/politics/2013/03/drones-explained . This question-and-answer article provides an overview of drones.