Drone warfare represents one of the most dramatic developments in the United States’ continual effort to maintain military superiority by implementing new technology. Unmanned aerial vehicles (UAVs), controlled from half a world away, can perform extended surveillance and intelligence gathering missions. When required, they can conduct air strikes against enemy targets. These capabilities can be achieved without placing a pilot in danger or by relying upon a single individual to perform flight duty over extended periods. The technical capabilities have raised major ethical and moral issues, not the least of which is the possibility that UAVs may violate international and domestic law.

Almost from its invention in 1903 the powered aircraft has been used as a tool allowing military commanders to see and strike the enemy from a somewhat safe distance. By 1911 the Italian Army used aircraft as part of its efforts to crush a native rebellion in Libya. Through both world wars, aircraft progressed in their range, speed, ability to gather intelligence, and lethality.

Despite these growing capabilities, aircraft were still limited due to the pilot's physical condition and concern over pilot safety. As an effort to surmount those limitations, drones made their first appearance in the 1950s and 1960s. They were first used as flying targets, allowing antiaircraft crews to track and destroy targets without killing a pilot. During the Vietnam War drones performed aerial reconnaissance. While these drones provided a valuable service, they could not return and safely land at their base but crashed after performing their mission. 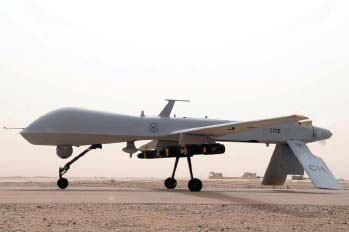 In the early 1970s Israeli-developed drones performed military reconnaissance missions and air strikes. An Israeli drone designer, Abraham Karem, moved to the United States in the 1980s and began developing drones, an activity funded at first by the US Defense Advanced Research Projects Agency (DARPA) and later by the Central Intelligence Agency (CIA). By the early 1990s drones were being used by the CIA in Bosnia to provide information for convoys and to spot Serbian military positions.

In 2000 drones were used extensively for intelligence purposes, and their use increased substantially after the 9/11 terrorist attacks. Drones have been widely used in both Afghanistan and Pakistan since 2004 for reconnaissance and as a means to kill selected individuals. After Barack Obama became president in 2009, his administration began defending the strategy and ramped up the number of drone strikes in Yemen, Somalia, and especially Pakistan. A drone strike in Pakistan in 2012 successfully killed Abu Yahya al-Libi, the man considered to be al-Qaeda's number-two leader. However, criticism of the tactic continued to rise on behalf of Pakistanis and Americans alike, especially concerning the loss of civilian lives. That following year, Obama gave a speech in which he promised tighter restrictions and rules regarding the use of drone strikes. Yet in early 2015, it was announced that two al-Qaeda hostages, an American and an Italian man, were killed during another attack by drones in Pakistan. President Obama made a public address to apologize to the families.

As a technological solution to military and foreign policy, drones allow their users to find and destroy targets without endangering the pilot or requiring a single individual to fly an aircraft for more hours than a normal pilot could. However, several issues mitigate the effectiveness of UAVs. First, they are not perfect; they have often hit the wrong target and have also caused civilian casualties. Their use as a selective means to assassinate individuals has drawn a great deal of criticism and is seen by many as a breach of international law. In the effort to win over populations, their remoteness and lethality can push public opinion against their users. Finally, in the United States, at least, their use within US borders to perform surveillance (a program acknowledged by the head of the Federal Bureau of Intelligence) has created significant concern, particularly with regard to whether they violate privacy rights as well as their being used as a means of attacking US citizens.