The term DOS is an acronym for “disk operating system.” DOS refers to any of several text-based operating systems that share many similarities. Perhaps the best-known form of DOS is MS-DOS. MS-DOS is an operating system developed by the technology company Microsoft. It is based heavily on an earlier operating system known as QDOS. DOS was largely replaced by operating systems featuring graphical user interfaces by the end of the twentieth century. It continues to be used in certain specialized contexts in the twenty-first century, however.

“Disk operating system” (DOS) is a catchall term for a variety of early operating systems designed for personal computers (PCs). Operating systems have existed since the early days of computers. They became more important in the late 1970s and early 1980s. At that time PCs became available to the public. An operating system allows users unfamiliar with computer programming to interface directly with these devices. Among the first companies to offer PCs for sale was the technology company IBM, a long-time leader in the field of computer technology.

In 1980 IBM sought to license an operating system for its new device, the IBM PC. IBM approached the company Digital Research to license its Control Program for Microcomputers (CP/M). However, the two companies were unable to come to an agreement. IBM made a deal with the software company Microsoft instead. Microsoft had been founded in 1975. It initially specialized in creating and licensing computer programs and programming languages. In order to supply IBM with an operating system, Microsoft licensed the Quick and Dirty Operating System (QDOS) from the company Seattle Computer Products. This system, later renamed 86-DOS, was based in part on CP/M and used similar commands but differed in several key ways. Notably, the operating system was designed to be used with computers, such as the IBM PC, that featured sixteen-bit microprocessors, which could process sixteen bits, or pieces of binary information, at a time. Microsoft also hired QDOS creator Tim Patterson. Microsoft asked Patterson to create a new version of QDOS to be licensed to IBM under the name PC-DOS. Microsoft went on to develop an essentially identical version called MS-DOS, which the company sold and licensed to computer manufacturers itself. 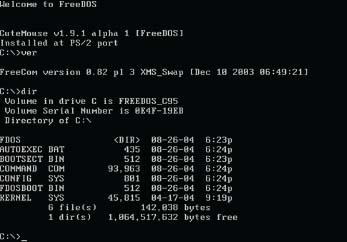 As IBM's PCs became increasingly popular, competing hardware manufacturers created similar computers. Many of these computers, commonly known as “IBM clones,” used MS-DOS. In addition to MS-DOS, PC-DOS, and 86-DOS, other DOS or DOS-compatible systems entered the market over the decades. However, MS-DOS dominated the market and was often referred to simply as DOS.

MS-DOS is the most popular and best-known form of DOS. MS-DOS consists of three key parts: the input/ output (I/O) handler, the command processor, and the auxiliary utility programs. The I/O handler manages data input and output and consists of two programs, IO.SYS and MSDOS.SYS. The command processor enables the computer to take commands from the user and carry them out. The most commonly used commands and associated routines are stored in the command processor. Others are stored on the system disk and loaded as needed. Those routines are known as “auxiliary utility programs.”

Like all operating systems, DOS functions as a shell. A shell is an interface that allows a user to operate a computer without needing knowledge of computer programming. A DOS or DOS-compatible system does require users to enter text-based commands. These are relatively simple and limited in number, however. As such, the public found PCs featuring the early forms of DOS fairly easy to use.

MS-DOS and later DOS and DOS-compatible systems are in many ways quite similar to those systems that came before, such as QDOS and CP/M. In general, MS-DOS and similar systems are nongraphical systems. Thus, they do not contain graphical elements found in later graphical user interfaces (GUIs), such as clickable icons and windows. Instead, nongraphical systems allow the user to operate the computer by entering commands into the command line. By entering basic commands, the user can instruct the computer to perform a wide range of functions, including running programs and opening or copying files.

Although DOS and other nongraphical systems were largely phased out by the mid-1990s as GUIs became more popular, they remained an influential part of the development of PC operating systems. Some graphical operating systems, such as Microsoft's Windows 95, were based in part on DOS, and had the ability to run DOS programs when opened in a specialized mode. Despite advances in computer technology, MS-DOS and similar systems are still used in the twenty-first century for applications. In some cases, companies or institutions continue to use the operating system in order to maintain access to software compatible only with DOS. Some individuals use DOS and DOS-compatible systems to play early games originally designed for those systems. Companies such as Microsoft no longer sell DOS to the public. However, a number of companies and organizations are devoted to providing DOS-compatible systems to users, often in the form of open-source freeware.