The advent of Information and Communication Technology (ICT), including a range of digital devices that allow connection to the Internet, has changed the way people communicate, interact, learn, produce, and circulate information. While ICTs have been lauded for their potential to democratize access to information, a serious gap exists in access to and use of ICTs. This gap is often referred to as the digital divide. The digital divide surfaces between countries based on economic and technological infrastructure. It also emerges within a country, between individuals who differ in terms of social class, education, location (urban or rural), age, and racial and ethnic backgrounds. Over time, the definition of the digital divide has expanded to include access to skill development, as well as access and use of ICTs.

Initially, the digital divide was defined as the gap between those with access to ICTs, the “haves,” and those without access, the “have-nots.” The absence of or limited access to affordable ICT infrastructure and services is viewed as a contributing factor to the growing digital divide between and within countries. Within countries, differences along the lines of income, education, location, age, and race and ethnicity are factors that differentiate ICT and Internet use. For example, in the United States, 2013 data from the Pew Research Center shows that children and youth from American Indian, Latino, and African-American backgrounds have significantly lower access to technology than children and youth from white and Asian-American backgrounds; residents in rural areas less likely to have access to computers in their households; and there is a generational gap between young people, who have had access to and experience with ICTs, and older adults, for whom opportunities to access and learn with ICTs has been limited. People with disabilities and people who speak Spanish as their primary language are also significantly less likely to use the Internet at all, and the gap is even larger when looking only at those who can access the Internet at home. The factors that appear to be most significant for higher levels of access and use, however, are higher levels of income and education.

The digital divide identifies a new landscape of inequity. People who do not have access to ICTs early in life and/or frequently are at a disadvantage. They will have limited access to information, including media reports, medical information, and opportunities to learn, as well as limited access to current methods of communication. Cost, inadequate computer skills, and lack of interest are some factors relating to people's disconnection from the Internet. In response, scholars are studying a second kind of divide that includes differences in ICT skills and skill development as attributes of a widening digital gap. 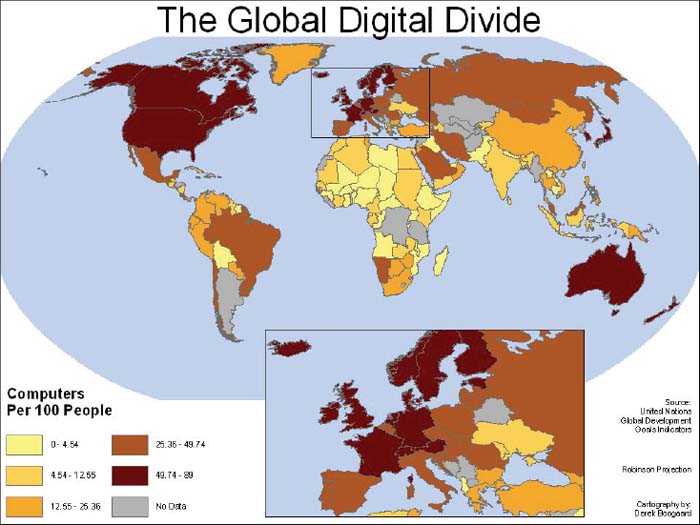 Access to, use of, and skills for engaging with ICTs are not developing equally across groups, communities, and countries. A lack of availability, access, and experience with ICTs, along with the thinking and practical skills that develop as a result, is hampered by insufficient public services and scarcity in technology resources. Educational environments are positioned to either: (1) contribute to the divide, for example, when educators lack preparation and support to teach with ICTs; or (2) enable children and youth to overcome it, for example, when the use of ICTs is integrated throughout classroom practices as a method for both teaching and learning. Educational policies and practices are changing in ways that support the effective use of ICTs in classrooms and enable students to benefit from, and grow with, the digitized world. However, until availability, access, and skills are made equally available to everyone, inside of and outside of schools, the digital divide is likely to exist.

File, Thom. “Computer and Internet Use in the United States: Population Characteristics.” Census. gov. US Dept. of Commerce, 2013. PDF file.