Diffusion of innovations (DOI) theory offers a framework for studying the processes of adopting an innovation through the lens of change; it tells the story of why and how quickly change occurs. Everett Rogers's 1962 seminal book, Diffusion of Innovations, defines innovations as ideas, practices, or objects perceived as new by an individual or culture. Diffusion is the process whereby an innovation is communicated over time among the members of a social system resulting in individual or social change. Diffusion of innovations applies primarily to technology integration and paves the way to study adoption in other disciplines.

In the fifth edition of Diffusions of Innovations Rogers describes adoption as the “full use of an innovation as the best course of action available” and rejection as the decision “not to adopt an innovation.” Four elements of DOI theory include innovation, time, communication channels, and social systems. The acceptance of an innovation is influenced by uncertainty. Change can often be a slow, uncomfortable process, which takes time before diffusion is accomplished. 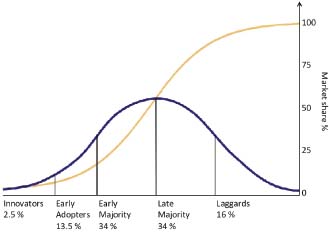 The diffusion of innovations according to Rogers (1962). With successive groups of consumers adopting the new technology (shown in blue), its market share (yellow) will eventually reach the saturation level.

Specialized interpersonal communication channels are necessary for diffusion. Social systems ultimately decide to modify an innovation to fit their culture.

Rogers proposes that the rate of adoption is influenced by multiple perceptions of relative advantage over a previous technology, compatibility with existing needs, complexity and perceived difficulty of use, and available trialability and observability to experiment and see the results of the innovation. The rate of adoption has been found to be positively correlated to these characteristics.

Diffusion of an innovation occurs in stages, beginning with knowledge and followed by persuasion, decision, implementation, and finally confirmation. Knowledge relates to the upfront understanding of the new technology. Persuasion is a positive attitudinal disposition. Decision is closely aligned to commitment followed by implementation. Confirmation is determined by the positive outcomes that reinforce use.

A final component offered by the DOI theory is a classification structure of adopters. Innovators tend to rapidly embrace a technology, followed closely by early adopters who readily accept change. Alternately, early majority adopters typically need more time, whereas, late majority adopters openly express skepticism but will eventually buy-in to the innovation once the majority has accepted the change. Individuals more comfortable with the status quo are termed laggards.

Adoption research has kindled the development of two popular instruments designed to measure change. In 1973 Gene Hall and colleagues developed the concerns-based adoption model (CBAM) that measures change along the continuum of skill development. A second dimension of CBAM identifies stages of concern (SoC), in which concern is conceptualized as the intensity of motivations, thoughts, and feelings moving an individual past internal acceptance toward a more global perspective.

Rogers's theoretical framework remains the most widely used theory leading to a deeper understanding of the process and rate of adoption of an innovation. The characteristics and classifications described are the pivotal factors influencing individual change and acceptance of an innovation into a social system.

Hall, Gene E., R. C. Wallace, and W. A. Dossett. A Developmental Conceptualization of the Adoption Process within Educational Institutions. Austin: U of Texas, 1973. Print.