The appeal of crowdsourcing is based on its relatively inexpensive cost and its ability to undertake problems too complex to solve with an organization's existing staff, as well as the idea that harnessing the knowledge of multiple individuals, who possess different knowledge and experiences, produces better, more accurate data. While individuals who participate in crowdsourcing are typically are demographically diverse, many have academic training or significant professional experience relevant to the project. Critics decry the quality and accuracy of crowdsourcing projects, but by the 2010s, the practice had become commonplace across a wide array of industries and endeavors.

Specialized forms of crowdsourcing allow the efforts of multiple users to achieve numerous types of distinct goals. Crowd creation is used frequently to solve complicated scientific problems. Crowdfunding involves collecting small sums of money from numerous contributors to meet fundraising goals for a start-up company or an artistic endeavor. Crowd searching leverages large networks of Internet and smartphone users to ascertain the location of a missing item or individual. Crowd voting makes use of communal judgment to grade, sort, and categorize Web-based content; it is the most common type of crowdsourcing (such as used on Reddit).

Although crowdsourcing is a creation of the Internet era, information-gathering projects with considerable numbers of participants have existed for decades. Crowdsourcing served as the means for the creation of the Oxford English Dictionary, was responsible for new methods for determining a ship's location in the Longitude Prize contest in Great Britain, and became a way to collect genealogical data for members of the Church of Jesus Christ of Latter-day Saints. 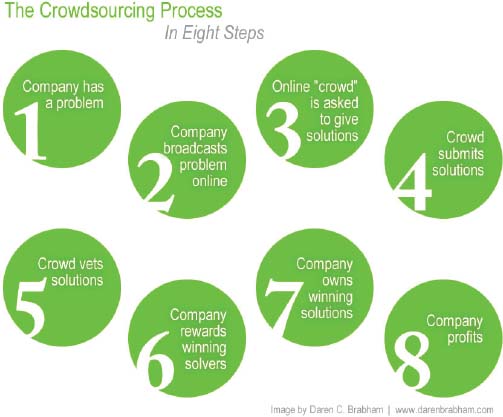 The crowdsourcing process in eight steps.

The Internet Movie Database and Wikipedia are two of the most successful examples of crowd-sourced Internet resources. Another well-received crowdsourcing project was the New York Public Library's “What's on the Menu,” which began in 2011 and sought to transcribe more than 45,000 historical restaurant menus from the 1840s to the 2010s. In 2011 the California Digital Newspaper Collection utilized crowdsourcing to correct the text of digitized newspapers, some of which predate California's founding in 1850. The Katrina PeopleFinder Project was developed in the wake of Hurricane Katrina in 2005; more than ninety thousand entries were inputted in an effort to keep track of the victims of the natural disaster. Carnegie Mellon University's CAPTCHA system, established in 2000, is a type of implicit crowdsourcing, where users identify characters as part of a logon sequence, which, in turn, is used to determinate text that optical character recognition (OCR) software cannot, thereby aiding the digitization of historical text documents.

Howe, Jeff. Crowdsourcing: Why the Power of the Crowd Is Driving the Future of Business. New York: Crown, 2009. Print.

Surowiecki, James. The Wisdom of Crowds: Why the Many Are Smarter than the Few and How Collective Wisdom Shapes Business, Economies, Societies, and Nations. New York: Doubleday, 2004. Print.