Computer modeling is the process of designing a representation of a particular system of interacting or interdependent parts in order to study its behavior. Models that have been implemented and executed as computer programs are called computer simulations.

A computer model is a programmed representation of a system that is meant to mimic the behavior of the system. A wide range of disciplines, including meteorology, physics, astronomy, biology, and economics, use computer models to analyze different types of systems. When the program representing the system is executed by a computer, it is called a simulation.

One of the first large-scale computer models was developed during the Manhattan Project by scientists designing and building the first atomic bomb. Early computer models produced output in the form of tables or matrices that were difficult to analyze. It was later discovered that humans can see data trends more easily if the data is presented visually. For example, humans find it easier to analyze the output of a storm-system simulation if it is presented as graphic symbols on a map rather than as a table of meteorological data. Thus, simulations that produced graphic outputs were developed. 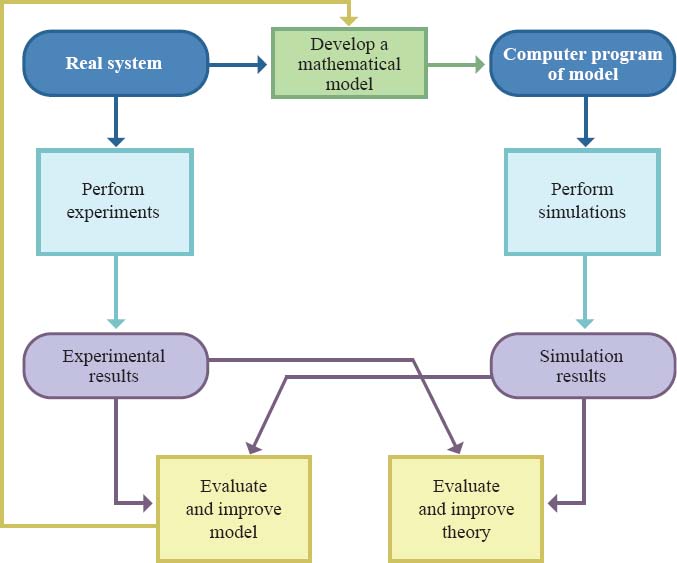 Mathematical models are used to identify and understand the details influencing a real system. Computer programs allow one to evaluate many variations in a mathematical model quickly and accurately, thus efficiently evaluating and improving models.
(Adapted from Allen and Tildesly, “Computer Simulation of Liquids.”)

Computer models are used when a system is too complex or hard to study using a physical model. For example, it would be difficult to create a physical model representing the gravitational effects of planets and moons on each other and on other objects in space, although the National Aeronautics and Space Administration (NASA) has done exactly that for the Voyager space probes now leaving the solar system.

To create a computer model, one must first determine the boundaries of the system being modeled and what aspect of the system is being studied. For example, if the model is of the solar system, it might be used to study the potential effect on the orbits of the existing planets if another planet were to enter the solar system.

To create such a model, a computer programmer would develop a series of algorithms that contain the equations and other instructions needed to replicate the operation of the system. Variables are used to represent the input data needed. Examples of variables that might be used for the solar system model include the mass, diameter, and trajectory of the theoretical new planet. The values that define the system, and thus how the variables affect each other, are the parameters of the system. The parameters control the outputs of the simulation when it is run. Different values can be used to test different scenarios related to the system and problem being studied. Example parameters for the solar system model might include the orbits of the known planets, their distance from the sun, and the equations that relate an object's mass to its gravity. Certain parameters can be changed to test different scenarios each time a simulation is run. Because parameters are not always constant, they can be difficult to distinguish from variables at times.

The model must also have a data source from which it will draw the input data. This data may be directly entered into the program or imported from an external source, such as a file, database, or spreadsheet.

It is important to select appropriate variables and parameters when designing a computer model. List two variables and two parameters that might be used to determine the speed of a baseball after it has traveled three feet from the pitcher's throwing hand.

Variables needed to determine the ball's speed might include the mass and size of the ball, the angle at which the ball is released, and the force with which it is thrown.

Parameters that define the system, which may be changed to test different scenarios, include wind speed, aerodynamic drag on the ball, and whether or not it is raining when the ball is thrown.

WHY COMPUTER MODELS ARE IMPORTANT

Computer models have provided great benefits to society. They help scientists explore the universe, understand the earth, cure diseases, and discover and test new theories. They help engineers design buildings, transportation systems, power systems, and other items that affect everyday life. With the development of more powerful computer systems, computer models will remain an important mechanism for understanding the world and improving the human condition.