Operators used to compare the value of a variable (x) to a given value are called “comparison operators.” The table provides multiple comparison operators, definitions of the operators, and statements using them. True and false examples of values for the variable are provided for each statement.
UNDERSTANDING COMPARISON OPERATORS

Comparison operators can compare a variety of data types, including integers and strings. For example, if x is an integer variable, x is less than 5 evaluates to true if x equals 4 or less but evaluates to false if x equals 5 or more. If x and y are string variables, x equals y evaluates to true only if the strings are the same length and are composed of the same characters in the same order. Therefore, “abc” is equal to “abc” but “abc” is not equal to “bac.” For some operations, only data of the same type can be compared. For example, if x is an integer and y is a string, then expression x is greater than y would return an error. Some languages, such as JavaScript and MySQL, use numeric values for the characters in a string to make the comparison.

Arrays are not typically compared using comparison operators. Different languages return different results when comparing arrays for equivalence. For example, the C language returns a pointer to the both array's location in memory and then compares the memory locations for equivalence. Thus, the contents of the arrays, their stored values, are not directly compared.

Similarly, when objects are compared with the “equal to” comparison operator in languages like JavaScript or C#, the comparison operator checks whether the objects are of the same class and does not compare the data stored within the objects. In the language PHP, however, the values are also assessed. It is thus important to be aware of the rules of the programming language in question.

They are also used to compare strings. Here another Boolean operator, OR, has been used to check two comparisons, and if either is true, the entire statement returns a value of true and the function is called:

Comparison operators are an important development tool because of their support for the if-else conditional logic. With the added power of Boolean logic, complex decision-making structures are possible. For instance, “branching,” or “selection,” allows for various courses of action to be taken (that is, different else-if statements to execute) depending on the condition.

However, using comparison operators incorrectly can lead to errors that are difficult to correct. Programmers must ensure they are aware of how comparison operators behave when used to compare different types of data in the using different computer languages, paying particular attention to how arrays, objects, and strings are handled.

Comparison operators are often used in process codes. In the following example, an error code is returned from a function that updates a customer's name in a database. Comparison operators are then used to determine which error has occurred and then to transfer control to the appropriate block of code. First, the function is called and the value it returns is stored in a variable named code.

Next, an if statement is used to execute different blocks of code depending on which value is returned by the function. 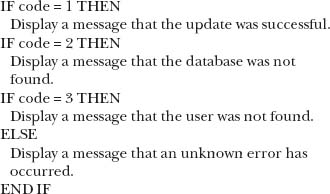 THE POWER OF COMPARISON

Comparison operators are used in a wide variety of development scenarios. They are used in authentication routines, where exact comparison is crucial. For example, a user's credentials may be checked against a database of authorized users before access to the database is permitted. Comparison operators may also be used for more mundane tasks such as processing discount codes. When a user types in a discount code, it is compared to valid codes, and if the code is valid, the applicable discount is applied.