CPU design is an area of engineering that focuses on the design of a computer's central processing unit (CPU). The CPU acts as the “brain” of the machine, controlling the operations carried out by the computer. Its basic task is to execute the instructions contained in the programming code used to write software. Different CPU designs can be more or less efficient than one another. Some designs are better at addressing certain types of problems.

The design of a CPU is a complex undertaking. The main goal of CPU design is to produce an architecture that can execute instructions in the fastest, most efficient way possible. Both speed and efficiency are relevant factors. There are times when having an instruction that is fast to execute is adequate, but there are also situations where it would not make sense to have to execute that simple instruction hundreds of times to accomplish a task.

Often the work begins by designers considering what the CPU will be expected to do and where it will be used. A microcontroller inside an airplane performs quite different tasks than one inside a kitchen appliance, for instance. The CPU's intended function tells designers what types of programs the CPU will most often run. This, in turn, helps determine what type of instruction-set architecture to use in the microchip that contains the CPU. Knowing what types of programs will be used most frequently also allows CPU designers to develop the most efficient logic implementation. Once this has been done, the control unit design can be defined. Defining the datapath design is usually the next step, as the CPU's handling of instructions is given physical form.

Often a CPU will be designed with additional supports to handle the processing load, so that the CPU itself does not become overloaded. Protocol processors, for example, may assist with communications protocol translation involving the transmission of data between the computer and its peripherals or over the Internet. Internet communication protocols are quite complex. They involve seven different, nested layers of protocols, and each layer must be negotiated before the next can be addressed. Protocol processors take this workload off the CPU. 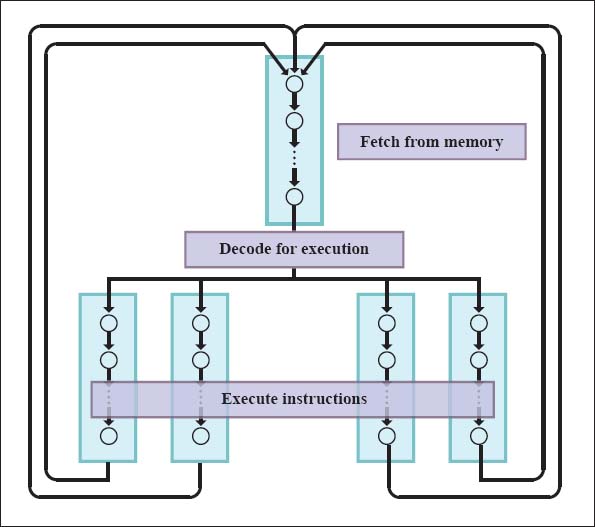 CPU design is heavily influenced by the type of instruction sets being used. In general, there are two approaches to instructions. The first is random logic. Sometimes this is referred to as “hardwired instructions.” Random logic uses logic devices, such as decoders and counters, to transport data and to perform calculations. Random logic can make it possible to design faster chips. The logic itself takes up space that might otherwise be used to store instructions, however. Therefore, it is not practical to use random logic with very large sets of instructions.

Moore's law is named after Gordon Moore, a co-founder of the computer manufacturer Intel. In 1975, Moore observed that the computing power of an integrated circuit or microchip doubles, on average, every two years. This pace of improvement has been responsible for the rapid development in technological capability and the relatively short lifespan of consumer electronics, which tend to become obsolete soon after they are purchased.

Stokes, Jon. Inside the Machine: An Illustrated Introduction to Microprocessors and Computer Architecture. San Francisco: No Starch, 2015. Print.