Boolean, or logical, operators are used to create Boolean expressions, which test whether a condition is true or false. Statements such as the if-statement use Boolean expressions to control the order in which a computer program processes commands and other statements.

However, as Boolean expressions become more complicated, they become increasing difficult to understand correctly. For example, the expression NOT x < 5 AND y > 1 OR country = “UK” can only be executed correctly if the order of precedence for the operators is known. Programmers use parentheses to define the order precedence they desire to make such expressions easier to understand. For example, the above expression could be rewritten as follows:

If statements and if-else statements could be used to assign a letter grade based on an exam score. First, a Boolean expression is used to check that the exam has been completed and scored. The AND operator is used because both conditions must be true for a letter grade to be assigned.

Next, the code uses a chain of if statements to assign a letter grade to the variable Grade. Note how the first statement does not use a Boolean operator because it does not need to evaluate more than one expression. The next three statements use the Boolean operator AND because they require both expressions to be true for the code to be executed. The final if-statement does not contain a Boolean expression because it executes only if all other if-statements fail to execute. 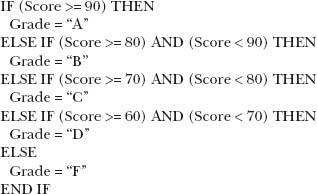 Boolean operators are commonly used when searching for information in a database. For instance, if a student needs to write a research paper on climate change, they might type in “global warming OR climate change.” This would tell the library's database to return results that include either phrase and thus increase the overall number of results returned.

Boolean operators are also used to program software in which a sequential flow of control is not desired. The conditions that they enable allow programs not only to branch through selection, but also to loop (or repeat) sections of code. Thus, Boolean operators allow more complex software to be developed.