This article briefly discusses the general issues involved with mobile computing and presents a history and analysis of Google's Android operating system. It concludes with a look at Android's future in the growing market for mobile technology.

A FORCE IN MOBILE COMPUTING

Mobile computing is the fastest-growing segment of the tech market. As pricing has become more affordable, developing nations, particularly in Africa, are the largest growing market for smartphones. With smartphones, users shop, gather information, connect via social media such as Twitter and Facebook, and communicate—one of the uses more traditionally associated with phones.

By far the most popular operation system running on mobile phones is Android. It has outpaced Apple's iOS with nearly double the sales. As of 2014, more than a million Android devices were being activated daily. Since its launch in 2008, Android has far and away overtaken the competition.

Android came about amid a transformative moment in mobile technology. Prior to 2007, slide-out keyboards mimicked the typing experience of desktop PCs. In June of that year, Apple released its first iPhone, forever altering the landscape of mobile phones. Apple focused on multitouch gestures and touch-screen technology. Nearly concurrent with this, Google's Android released its first application program interface (API).

The original API of Google's new operating system (OS) first appeared in October 2008. The Android OS was first installed on the T-Mobile G1, also known as the HTC Dream. This prototype had a very small set of preinstalled apps, and as it had a slide-out QWERTY keyboard, there were no touchscreen capabilities. It did have native multitasking, which Apple's iOS did not yet have. Still, to compete with Apple, Google was forced to replace physical keyboards and access buttons with virtual onscreen controls. The next iteration of Android shipped with the HTC Magic and was accompanied by a virtual keyboard and a more robust app marketplace. Among the other early features that have stood the test of time are the pull-down notification list, home-screen widgets, and strong integration with Google's Gmail service.

One later feature, the full-screen immersive mode, has become quite popular as it reduces distractions. First released with Android 4.4, “KitKat,” in 2013, it hides the navigation and status bars while certain apps are in use. It was retained for the release of Android 5.0, “Lollipop,” in 2015. 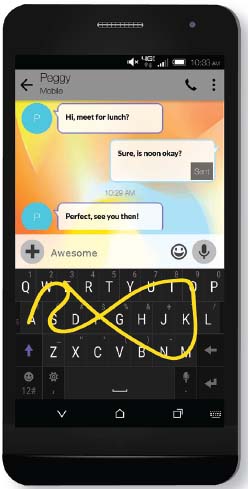 The swype keyboard, originally designed for Android operating systems, was developed to speed up typing capabilities by allowing the user to slide a finger over the keyboard from letter to letter without lifting their finger to choose each character. This standard software in the Android operating system allows for quick texting.
ANDROID CHANGES AND GROWS

This open-source development of Android has had one adverse effect: the phenomenon known as “forking,” which occurs primarily in China. Forking is when a private company takes the OS and creates their own products apart from native Google services such as e-mail. Google seeks to prevent this loss of control (and revenue) by not supporting these companies or including their apps in its marketplace. Forked versions of Android made up nearly a quarter of the global market in early 2014.

Google's business model has always focused on a “rapid-iteration, web-style update cycle.” By contrast, rivals such as Microsoft and Apple have had a far slower, more deliberate pace due to hardware issues. One benefit of Google's faster approach is the ability to address issues and problems in a timely manner. A drawback is the phenomenon known as “cloud rot.” As the cloud-based OS grows older, servers that were once devoted to earlier versions are repurposed. Since changes to the OS initially came every few months, apps that worked a month prior would suddenly lose functionality or become completely unusable. Later Android updates have been released on a timescale of six months or more.

In 2014 alone, more than one billion devices using Android were activated. One of the biggest concerns about Android's future is the issue of forking. Making the code available to developers at no cost has made Android a desirable and cost-effective alternative to higher-end makers such as Microsoft and Apple, but it has also made Google a target of competitors.

Another consideration for Android's future is its inextricable link to the Chrome OS. Google plans to keep the two separate. Further, Google executives have made it clear that Chromebooks (laptops that run Chrome) and Android devices have distinct purposes. Android's focus has been on touch-screen technology, multitouch gesturing, and screen resolution, making it a purely mobile OS for phones, tablets, and more recently wearable devices and TVs. Meanwhile, Chrome has developed tools that are more useful in the PC and laptop environment, such as keyboard shortcuts. However, an effort to unify the appearance and functionality of Google's different platforms and devices called Material Design was introduced in 2014. Further, Google has ensured that Android apps can be executed on Chrome through Apps Runtime on Chrome (ARC). Such implementations suggest a slow merging of the Android and Chrome user experiences.