3D printing, also called additive manufacturing (AM), builds three-dimensional objects by adding successive layers of material onto a platform. AM differs from traditional, or subtractive, manufacturing, also called machining. In machining, material is removed from a starting sample until the desired structure remains. Most AM processes use less raw material and are therefore less wasteful than machining.

The first AM process was developed in the 1980s, using liquid resin hardened by ultraviolet (UV) light. By the 2000s, several different AM processes had been developed. Most of these processes use liquid, powder, or extrusion techniques. Combined with complex computer modeling and robotics, AM could launch a new era in manufacture. Soon even complex mechanical objects could be created by AM.

3D printing begins with a computer-aided design (CAD) drawing or 3D scan of an object. These drawings or scans are usually saved in a digital file format known as STL, originally short for “stereolithog-raphy” but since given other meanings, such as “surface tessellation language.” STL files “tessellate” the object—that is, cover its surface in a repeated pattern of shapes. Though any shape can be used, STL files use a series of non-overlapping triangles to model the curves and angles of a 3D object. Errors in the file may need repair. “Slices” of the STL file determine the number and thickness of the layers of material needed.

The earliest AM technique was stereolithography (SLA), patented in 1986 by Chuck Hull. SLA uses liquid resin or polymer hardened by UV light to create a 3D object. A basic SLA printer consists of an elevator platform suspended in a tank filled with light-sensitive liquid polymer. A UV laser hardens a thin layer of resin. The platform is lowered, and the laser hardens the next layer, fusing it to the first. This process is repeated until the object is complete. The object is then cleaned and cured by UV. This AM technique is also called vat photopolymerization because it takes place within a vat of liquid resin. Various types of SLA printing processes have been given alternate names, such as “photofabrication” and “photo-solidification.” 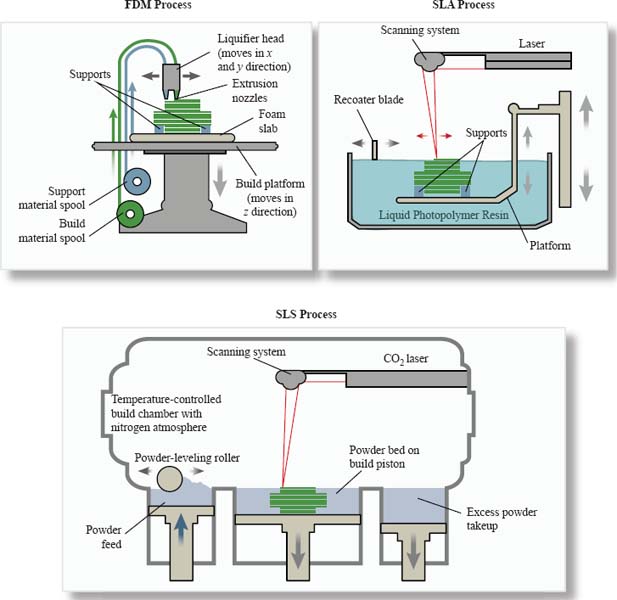 In the 1980s, engineers at the University of Texas created an alternate process that uses powdered solids instead of liquid. Selective layer sintering (SLS), or powder bed fusion, heats powdered glass, metal, ceramic, or plastic in a powder bed until the material is “sintered.” To sinter something is to cause its particles to fuse through heat or pressure without liquefying it. A laser is used to selectively sinter thin layers of the powder, with the unfused powder underneath giving structural support. The platform is lowered and the powder compacted as the laser passes over the object again.

Material extrusion printing heats plastic or polymer filament and extrudes it through nozzles to deposit a layer of material on a platform. One example of this process is called fused deposition modeling (FDM). As the material cools, the platform is lowered and another layer is added atop the last layer. Creating extruded models often requires the use of a structural support to prevent the object from collapsing. Extrusion printing is the most affordable and commonly available 3D printing process.

Several other 3D printing methods are also emerging. In material jetting, an inkjet printer head deposits liquefied plastic or other light-sensitive material onto a surface, which is then hardened with UV light. Another inkjet printing technique is binder jetting, which uses an inkjet printer head to deposit drops of glue-like liquid into a powdered medium. The liquid then soaks into and solidifies the medium. In directed energy deposition (DED), metal wire or powder is deposited in thin layers over a support before being melted with a laser or other heat source. Sheet lamination fuses together thin sheets of paper, metal, or plastic with adhesive. The resulting object is then cut with a laser or other cutting tool to refine the shape. This method is less costly but also less accurate than others.

THE FUTURE OF 3D PRINTING

While AM techniques have been in use since the 1980s, engineers believe that the technology has not yet reached its full potential. Its primary use has been in rapid prototyping, in which a 3D printer is used to quickly create a 3D model that can be used to guide production. In many cases, 3D printing can create objects that are stronger, lighter, and more customizable than objects made through machining. Printed parts are already being used for planes, race cars, medical implants, and dental crowns, among other items. Because AM wastes far less material than subtractive manufacturing, it is of interest for conservation, waste management, and cost reduction. The technology could also democratize manufacturing, as small-scale 3D printers allow individuals and small businesses to create products that traditionally require industrial manufacturing facilities. However, intellectual property disputes could also occur more often as AM use becomes more widespread.