Ethanol is an alcohol fuel made from the sugars found in plants. It is flammable and produces heat energy when burned. Ethanol factories produce ethanol from many types of biomass, especially corn and sugarcane. Farmers grow the biomass and sell it to processing plants. Processors convert the biomass to ethanol and sell it, mostly for use as a motor vehicle fuel. Ethanol is a common type of biofuel because it is easy to make. 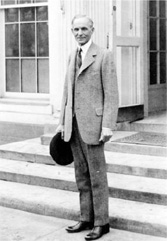 Henry Ford was an American inventor and founder of the Ford Motor Company. In 1908, his company introduced the Ford Model T automobile. The Model T, built to run on gasoline or ethanol, was the first mass-produced car in the world. Ford supported the use of ethanol fuel over gasoline. Ethanol, he reasoned, would help American farmers who grew the crops to make the fuel. Gasoline, however, was cheaper than ethanol and soon became the fuel of choice for carmakers and consumers. Henry Ford once said that he believed ethanol was the fuel of the future. Maybe he was right.