Have you noticed that the Earth is hottest at the core and gets cooler as we reach the crust? Because it has cooled, the rock near the Earth's surface is hard and solid. We call this layer of hardened rock the lithosphere. 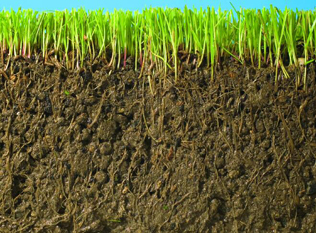 Grass and grass roots in soil.

When people think of soil, they often think of dirt. That's easy to understand, because soil can certainly make you dirty! Soil is very important to life on Earth. It is where plants and grasses grow. It is home to many small animals. 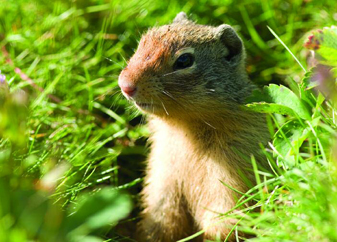 Gopher's make their home in soil.

Just as the Earth has layers, the soil has its own layers. These layers are called horizons.

Very high in organic matter. Plants grow here. Animals live in and above the topsoil. Can be as much as 12 inches (30 cm) deep.

Lower in organic matter than topsoil. Plant roots often reach down to this level for water. Many nutrients at this level help plants grow. Can range from 6 inches (15 cm) to 3 feet (1 m) below ground.

Made of rock particles that have been worn down and minerals. Very little life or organic material. Can go many feet deep into the ground.

The color of soil is affected by its composition, so geologists can tell a lot about soil from its color.

Think of how sand feels as it squeezes between your toes on the beach. Now think of how clay feels as you mold it. Soil texture is the amount of different sized inorganic particles in the soil. The texture affects how the soil feels when you touch it.

The largest sized particle. You can see grains of sand with the naked eye. Sand feels gritty and rough to the touch.

Smaller sized particles that can only be seen with a microscope. Silt is silky and smooth when wet, and feels almost like flour.

Particles are much smaller than silt. Clay is sticky when wet and can be easily molded.

Why are some areas of the Earth covered in lush grasslands, while others are barren deserts? Some soils are much more fertile than others. Soil fertility is the soils ability to support plant life.

The type of soil in an area has a great affect on how fertile the soil is. Larger soil particles, like sand, cannot hold water or nutrients very well. That is why the sand in deserts can support very few plants. 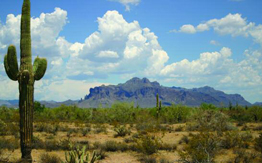 The Superstition Mountains in the Arizona desert.

In soil that is made up of silt or clay, water and nutrients stay in the smaller particles. Such soil is much more fertile. Many different types of plants can grow in fertile soil. 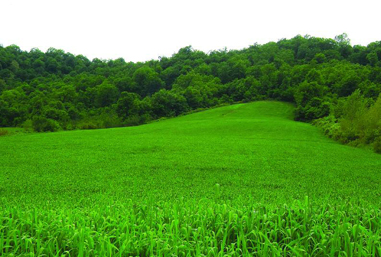 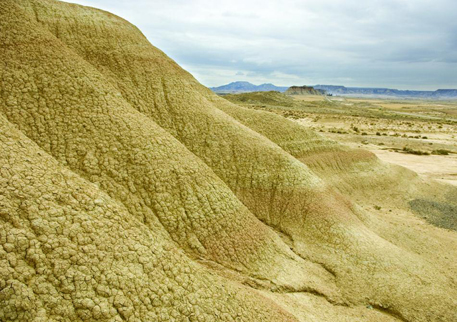 Soil erosion occurs when wind, rain, or other events move soil from one place to another. This process happens naturally and is part of soil creation. Too much erosion, however, can harm the soil's ability to grow plants.

A soil's color, texture, fertility, and resistance to erosion depend on many things. These include the amount of plant life, leaf cover, root length, rodents, worms, bacteria, and fungi.