The Power of Photosynthesis

Most of the energy we use is a result of photosynthesis; the process plants use to make food. During photosynthesis, plants use chlorophyll, a green pigment, to capture light energy from the Sun. The energy helps plants change water and carbon dioxide into glucose. Plants use glucose, a simple sugar, as food, or they convert the sugar to a starch and store it for later use. 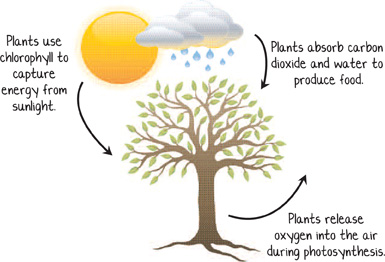 Carbon is the fourth most abundant element in the universe. It is a building block of all living things and is found nearly everywhere on Earth. Carbon exists in fossil fuels, soil, water, plants, and animals, and in our atmosphere as carbon dioxide gas. We release carbon dioxide gas when we burn fossil fuels and biomass. In turn, plants absorb some of the gas during photosynthesis. Carbon constantly moves in a cycle and never goes away. The carbon cycle is nature's way of moving carbon where it's needed.