We often hear about living things being endangered. Sometimes the plant or animal is becoming extinct, or dying out. Often we have never heard of the animal or plant that is in danger. Does it matter if it dies out?

The story of the sea otter shows what can happen if a species disappears from an area. In the past, sea otters lived all along the west coast of North America. 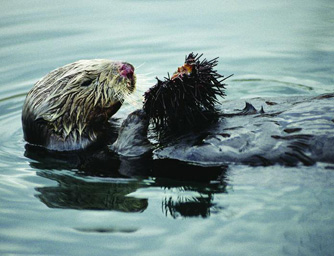 Sea otters often use tools to get their food. They put a stone on their stomach and use it to break open shellfish and other food.

Sea otters lived along the east coast of Asia, too. In the eighteenth century, trappers began to hunt sea otters. They wanted the otters' thick, silky fur. Soon, otters began to disappear from the coast. By 1911, there were less than 2,000 otters left in the world. 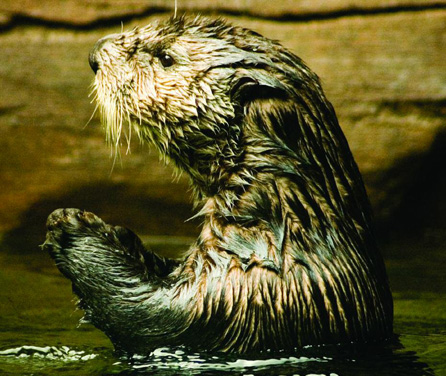 Some sea mammals such as seals and whales have a thick layer of fat under the skin. This helps keep out the cold. Otters do not have this fat layer. They have only fur. To keep them warm, the fur is very thick. One square inch of fur (2.5 sq. centimeters) contains one million hairs. This is ten times the number of hairs on your head. 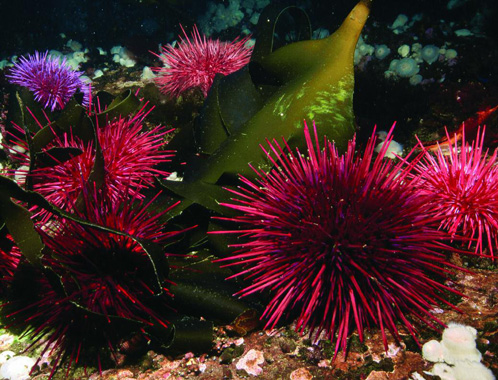 Purple sea urchins like these live all along the west coast of America. Their main food is giant kelp.

The sea otters live in forests of brown seaweed. This seaweed is called giant kelp. When otters in an area died out, “bald patches” appeared in the kelp. These patches were caused by sea urchins. Sea urchins eat kelp. But otters eat sea urchins. They keep down the number of sea urchins.

It is easy to tell when a sea otter is eating lots of purple sea urchins. Its teeth turn purple! And though you can't see it, the otter's bones are purple, too.

Luckily, sea otters did not die out. Now, they are protected. They have come back to many areas. As they come back, the kelp starts to recover.

Sea otters, sea urchins, and kelp are connected. The connection is through food. These kinds of connections are called food chains. They often occur between living things in an environment.

Each arrow points from something that is eaten to an animal that eats it. 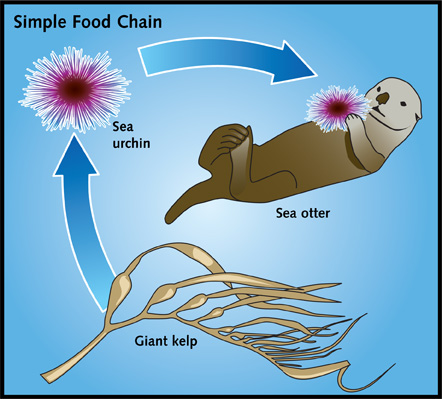 Giant kelp, sea urchins, and sea otters are connected together in a food chain.