Usually cells function properly. They grow and repair themselves to do their work. They also divide in an orderly way. But things go wrong from time to time. 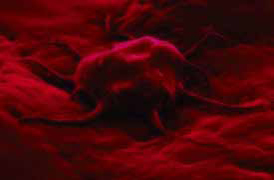 Cancer cells can break away from where they started and spread the cancer to other parts of the body.

Sometimes certain cells in multicellular organisms cannot stop dividing. These wild cells, called cancer cells, cause problems. They get in the way of normal cells trying to function. Cancer cells also take nutrients needed by the body's other cells. Eventually the uncontrolled cells pile up and push into healthy tissue. Cancer cells can cause so much harm that the organism dies.

Sometimes there are mistakes in an organism's genetic information. As a result, certain cells get the wrong instructions. Parents often pass on genetic mistakes to their offspring. 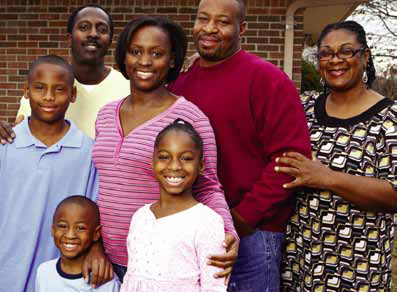 Sickle Cell Anemia is a hereditary disease that affects many African Americans. One in 600 gets the disease by inheriting a flawed gene from both parents.

One genetic mistake in humans causes red blood cells to form incorrectly. Instead of their normal disk-shape, the cells look like hooks. But this hook, or sickle, shape prevents the cells from doing their job properly. As a result, they die quickly. Without enough red blood cells, a person gets sick. This disease, called sickle cell anemia, can lead to death. 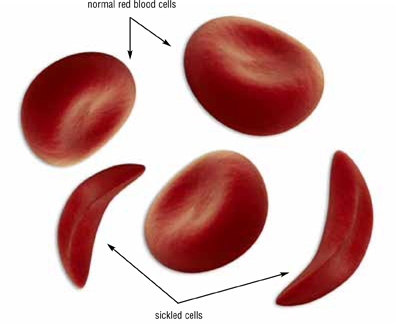 Cells can also malfunction when under attack. The tiniest attackers are viruses. A virus, made of just a few chemicals, is like a little traveling packet of genetic instructions.

A virus is not alive on its own. But it seeks to make copies of itself. In order to do that, it must invade a cell. When it does, the virus takes control. It forces the cell to make more viruses. After a cell produces many viruses, it often bursts. Meanwhile, the newly-created viruses invade other healthy cells. The process goes on and on.

Many different viruses attack humans. They include measles, mumps, and chickenpox. Viruses cause colds and flu, too. AIDS is also a virus.

How a Virus Invades a Cell 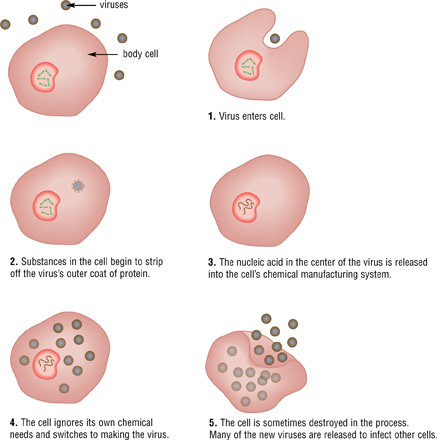 Scientists have identified about 5,000 viruses. Some attack plant cells and bacteria, too.

Bacteria are everywhere. Most are harmless, but some cause disease. Once inside an organism, these harmful bacteria start dividing quickly. They also take nutrients meant for the organism's cells. Certain types of bacteria even produce poisons, called toxins. These toxins can kill healthy cells.

Some bacteria live permanently in our intestines. They help us to digest our food.

In humans, bacteria are the cause of many ailments. These fast-producing invaders can cause ear infections and strep throat. Toxins from certain bacteria can cause a type of food poisoning called botulism. Bacteria also cause disease in other animals and plants. 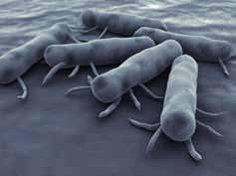 Salmonella bacteria can grow easily in many foods. To prevent illness, people should prepare and store food safely.