Every cell has work to do. But different cells may have different jobs. In multicellular organisms, cells with the same type of job often work together. These groups of specialized cells form tissue. In turn, tissues often group together to form larger units, called organs. The heart is an organ; so is the stomach.

Humans have over 200 kinds of cells.

The cells of each organ or tissue have specific jobs. In humans, for instance, different groups of muscle cells are in charge of walking, throwing, chewing food—even blinking.

In each muscle tissue, the cells work in bundles. An arm muscle, for example, is made of thousands of long, tube-like cells called muscle fibers. When the muscle moves, it tightens, or contracts. Each of its muscle cells contracts, too. Muscle cells have the right structure to contract easily.

Sending messages is the job of nerve cells, or neurons. Cordlike bundles of neurons, called nerves, spread like branches through the body. All the branches combined form the nervous system. It consists of billions of nerve cells.

Messages move rapidly in the nervous system. This happens in a person who suddenly spots a fast-moving car on the street. Instantly, that person jumps back to the curb. 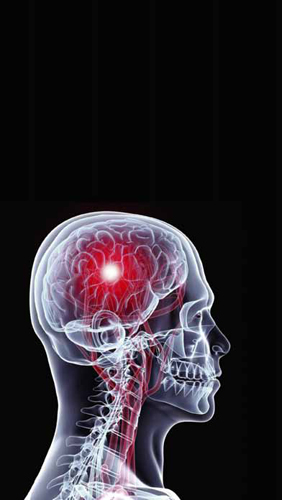 Some nerve messages, or impulses, travel at 300 feet (90 meters) per second.

The whole process takes just a moment. But a lot occurs during that time. Special cells in the person's eyes pick up light rays bouncing off the car. These receptor cells translate that information into a nerve message. Then sensory neurons carry that message to the brain and spinal cord.

Brain neurons quickly decode the message. They send a return message to the eyes: “A car is coming!” The brain also sends a message to neurons in the right muscles: “Get back on the curb!” The person's legs instantly step back. 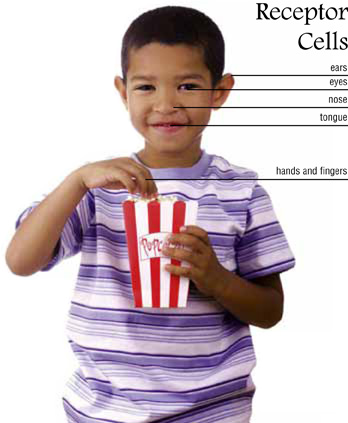 Chemicals from foods stimulate receptor cells inside the taste buds on our tongues.

Without blood, we could not survive. Human blood consists of three types of cells. These are the red blood cells, white blood cells, and the platelets. They all move around in a watery liquid called plasma. Each type of cell has an important job to do.

Red blood cells are like delivery trucks. They drop off oxygen to all our body's cells and remove carbon dioxide. These disk-shaped cells can squeeze through the smallest blood vessels to reach each cell.

Did you know that the mature red blood cell has no nucleus? 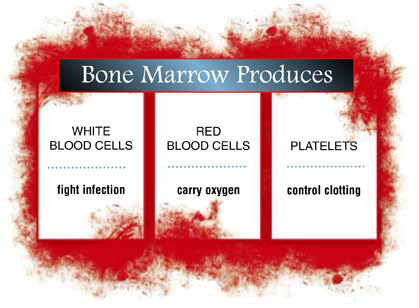 Platelets are the blood's repairmen. Groups of them stick together to form a plug whenever a blood vessel breaks.

Multicellular plants also have cells with different jobs to do. These cells group together into tissues. One type of tissue delivers water, minerals, and nutrients to different parts of the plant. Some of its cells carry materials from the roots to the leaves. Others carry food made in the leaves to other plant parts. 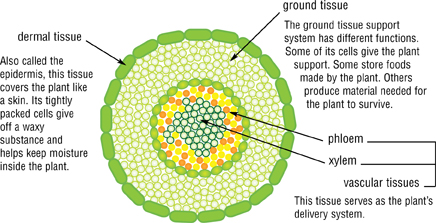 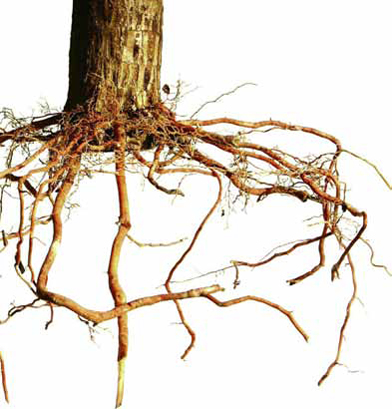 At the tip of every root is a group of protective cells called the root cap.

Plant roots hold the plant firm in the ground. Each root's thread-like hairs absorb water and minerals from the soil. Cells in the root hairs have the right structure for taking in these substances.

Single Cells on the Move

Some single-celled organisms have special features that help them move. The paramecium, for instance, has a covering of fine hairs. These hairs, or cilia, help the tiny animal swim. 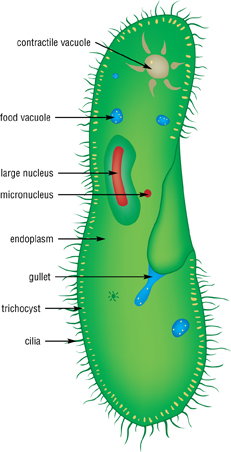 Paramecia make their homes in freshwater environments such as ponds and slow streams.

The amoeba, another single-celled animal, uses its changing form to move. Shaped like a blob, the amoeba pushes its cell membrane in the direction it wants to go. The membrane forms a fingerlike shape called a false foot. The cytoplasm flows in to fill up the foot. 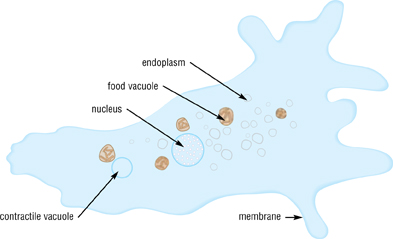 To eat, the amoeba wraps its false foot around its food and takes it inside.