Think of the globe in your classroom. Most classroom globes are 16 inches (41 centimeters) in diameter. If you made a model of the solar system and used the classroom globe as your Earth, our Moon would be about the size of a baseball, with a diameter of 4 inches (10 centimeters).

Remaining consistent in your scale, the Sun would have to be 146 feet (44.6 meters) in diameter, a little smaller than the diameter of the geosphere at Epcot Center in Florida. 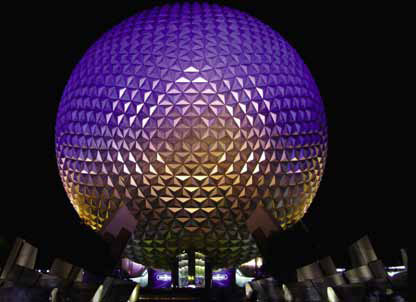 Another model, using a different scale, would make it easier to view the distance from the Sun to Pluto all at once. If you placed the Sun on one goal line of a football field, Pluto's position would be on the opposite goal line, 100 yards (91.4 meters) away. Earth would sit 2.5 yards (2.3 meters) away from the Sun. This model gives a better understanding of the relative distance from the Sun to each planet, ending at Pluto. But the reduced scale of this model makes it necessary to reduce the size of the Sun and planets as well. No longer the size of a classroom globe, in this scale the Earth would have a diameter of 0.008 inch (0.2 millimeters). Even the Sun would be smaller than one inch wide. Its diameter would measure 0.85 inches (21.5 millimeters).

Sitting in the stands of the football stadium, we wouldn't even be able to see the Sun and the tiny planets. But if we placed a stake in the ground at each planet's position, we could at least get an idea of where they would be, and we would have a better understanding of the immensity of our solar system.

AU stands for astronomical unit. It is the distance from the center of the Earth to the center of the Sun. In this scale model, it is 2.5 yards (2.3 meters), but a true AU is 93 million miles (149.6 million kilomters).