Until about 500 years ago, most people thought that the Earth was the center of the universe and the Sun and other planets revolved around it. This was called the geocentric model of the universe. 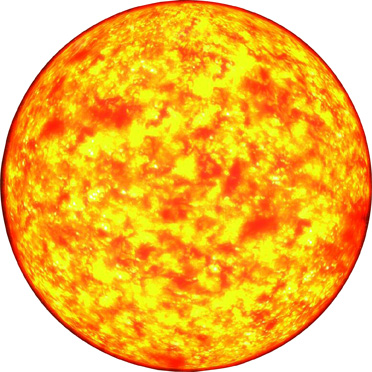 We now know that the Sun is at the center of our solar system, a belief that was proposed by the Polish astronomer Nikolai Copernicus in 1543. This is called the heliocentric model, named after the Greek sun god Helios.

The Sun is a medium sized star in the Milky Way galaxy, one of billions of such stars in the universe. It is a yellow dwarf star. Despite that name, the Sun is by far the largest body in our solar system. The Earth has a diameter of almost 8,000 miles (12,870 km), but the Sun's diameter is over 1,000 times larger!

Because of its great size, the Sun exerts great gravitational pull on the planets that keep them in orbit.

Even though the Sun is far from Earth, it supplies almost all the heat and energy on our planet. It does this by burning gases that reach temperatures of 11,000° F (6,093° C) on the surface. Temperatures can reach 27 million° F (15 million° C) at the Sun's core. 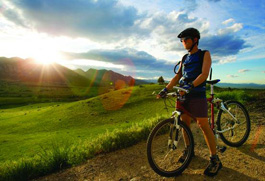 The Sun provides energy for life on Earth.

Facts about the Sun

A circle with a dot inside.

Contains 98 percent of the mass of the entire solar system.

Made mostly of hydrogen and helium.

You should never look directly into the Sun, even during an eclipse.