To begin to understand space, we first need to know what is in our own neighborhood. In Earth's case, our neighborhood is called the solar system. This is made up of the Sun and all the planets and objects that revolve around it. The Sun is at the center of our solar system. Eight planets orbit, or revolve around, the Sun. These planets are Mercury, Venus, Earth, Mars, Jupiter, Saturn, Uranus, and Neptune.

Many of these planets have at least one moon. Moons are kept in their orbits by the gravitational pull of their planets.

Other objects you will find in our solar system include dwarf planets, comets, asteroids, and meteoroids. 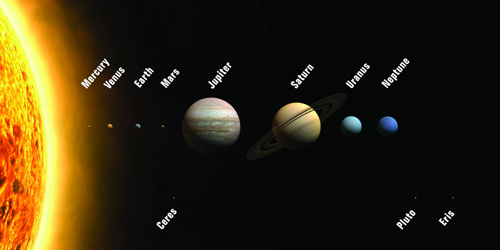