Joining Up Atoms, Reacting With Other Elements, Organizing Chemistry

There are many ways to join two or even three different elements together. Many common substances are simple compounds. Often they are made from just a few elements. Water, for instance, is written as H2O. This means that water molecules are made of two atoms of hydrogen joined to one atom of oxygen. Table salt is even simpler. It is the elements sodium and chlorine joined together—NaCl. 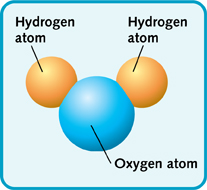 But some compounds are more complex than salt and water. In living things, compounds can have very large molecules. Proteins, for instance, can contain thousands of atoms.

The biggest molecule is probably deoxyribonucleic acid, or DNA. DNA is what our genes are made from. In humans, a DNA molecule holds over thirteen billion atoms.

This model shows a short section of a DNA molecule. It is made of two very long chains of atoms, twisted together in a spiral. 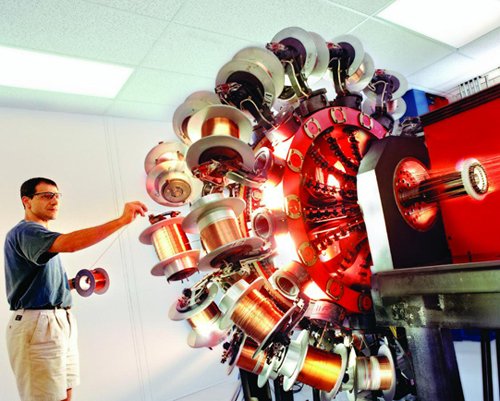 As new kinds of technology develop, we find new ways of using elements. The wires being wound here are made from the elements titanium and niobium. They are used to make special magnets.

Reacting With Other Elements

We have seen that some elements are reactive. Others are not. Potassium, for instance, reacts violently with water. The noble gases do not react with anything.

Scientists have found patterns in the reactivity of elements. Metals are more reactive the farther down the column, or group, you go. In Group 1, for example, potassium is more reactive than sodium and lithium. Nonmetals get less reactive as you move down the group. For example, fluorine is the most reactive of the halogens. Chlorine, which is below it, is less reactive.

Potassium is in Group I of the periodic table. Group I elements are called alkaline metals. We have already seen that potassium bursts into flames if you put it in water. Potassium is not the most reactive alkaline metal, however. Rubidium and cesium are lower down Group I. When these elements are mixed with water, they explode! (Francium, which is below cesium in Group I, is radioactive and too unstable for chemical reactions.)