The periodic table can be divided into two main types of elements. These are metals and nonmetals. Most elements are metals. 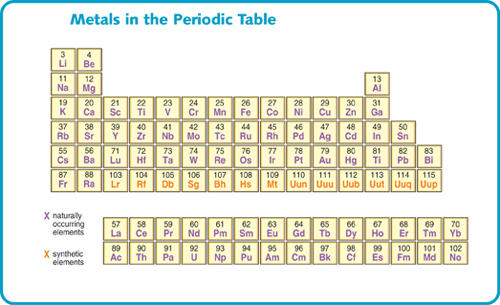 This shows only the metals in the periodic table.

Metals conduct electricity and heat. Many are strong, shiny materials. They are often hard to melt. But, not all metals are like this. Some, such as sodium and potassium, are soft. Mercury is a metal, too. It is liquid at room temperature. 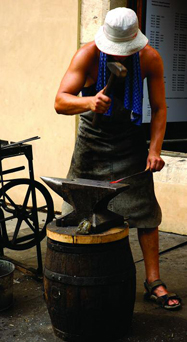 This blacksmith is hammering an iron bar to shape it. The end of the bar is red hot, because heating the iron makes it softer and easier to shape.

An alloy is a metal-based mixture. It can be made by mixing two metals together. It can also be made by adding a small amount of nonmetal to a metal. The properties of alloys are different from the pure metals they are made from. For example, iron rusts easily. Chromium is not strong. However, if you alloy (mix) iron with at least 10 percent chromium you get stainless steel. This material is strong and does not rust.

Metals have some chemical properties in common. For instance, all metals form salts when they combine with acids. Sodium will react with the acid hydrogen chloride to make sodium chloride (table salt). The reaction is dangerous. It happens fast and produces lots of heat.

Table salt is only one of many salts. Epsom salt, for instance, is a medicine that helps heal scratches and rashes. It is a salt of the metal magnesium. Cinnabar is a reddish kind of rock. It is a salt of mercury. In the past, cinnabar was used to make vermilion, a brilliant red paint.

When an acid and a metal react together, they produce another substance besides a salt. The other product is hydrogen gas. 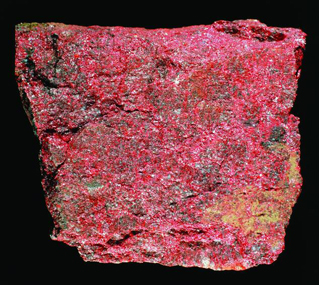 Cinnabar is a salt containing mercury and sulphur (HgS). It is the most common ore of mercury.

Most metals react with oxygen. They form substances called oxides. Iron reacts with oxygen in the air. It results in a reddish, powdery oxide, better known as rust. Other metals “rust” in air, too. But, in some metals, such as aluminum, the oxide forms a thin, hard coating on the surface. This coating protects the metal from further “rusting.” 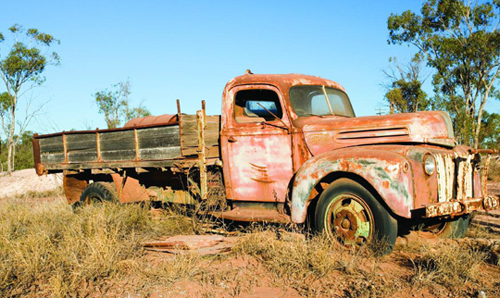 This truck has reached the end of its life and is covered in rust. The paint on a car or truck protects the steel body from rust for years. Other steel or iron parts of the car are covered with a thin layer of zinc to stop them from rusting.

Different metals have things in common. But, there are many differences between them, too.

Copper is a good conductor of electricity. It is often used for electric wires. Iron is very strong. So iron and steel are often used to build skyscrapers, bridges, and other structures. Aluminum is strong, too. It is lighter than iron. It is used in structures that need to be both light and strong, such as airplane frames. Iron, cobalt, and nickel are the only elements that are magnetic. They are used to make magnets. 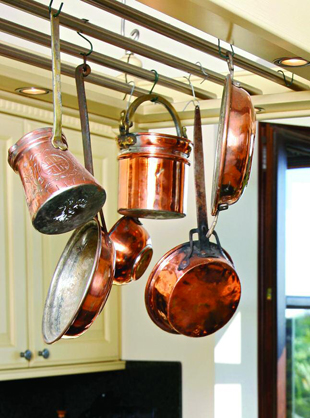 Copper conducts heat as well as electricity. This is why these pans are made from copper.

Some alloys (metal mixtures) have special properties, too. Bismuth alloys melt in hot water, like chocolate. Certain alloys are called memory metals. These can be treated so that they “remember” their shape. If the alloy is bent or twisted, it can be heated. Then it will return to its original shape. 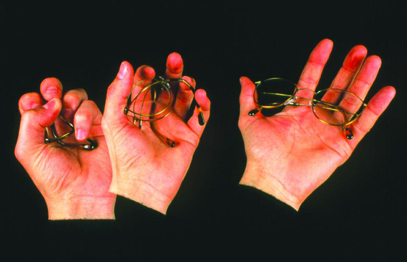 These spectacles are made from memory metal. The metal bends when it is squashed, but afterwards the frames spring back to their original shape.

Some metals have interesting properties. Mercury is a liquid at room temperature. Potassium and lithium catch fire in water. Gold can be beaten into a sheet four-hundred times thinner than a human hair.