Looking at the Groups, Discovering the Noble Gases

The periodic table shows the elements by atomic mass. The table starts with the lightest element. And it ends with the heaviest. Hydrogen is the lightest element. It has one proton and one electron. Next is helium. It has two protons and two electrons. Lithium has three protons and electrons, and so on. (The number of protons or electrons in an element's atom is called its atomic number.) 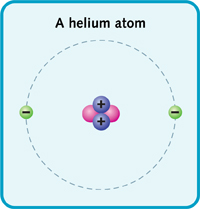 A helium atom has a nucleus with two protons and two neutrons. Two electrons zoom around the nucleus.

The periodic table has seven rows. (Look at the periodic table.) Each row holds a different number of elements. The first row has two elements—hydrogen and helium. The next two rows have eight elements each. (Elements 57-70 and 89-102 are very similar. They are often put in a separate block at the bottom.)

The periodic table is often shown in rows and columns. But, there are many ways to show it. There are circular versions and spiral versions. Some are shown in three dimensions or as a chemical galaxy. 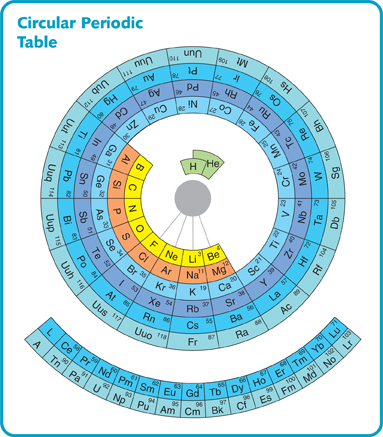 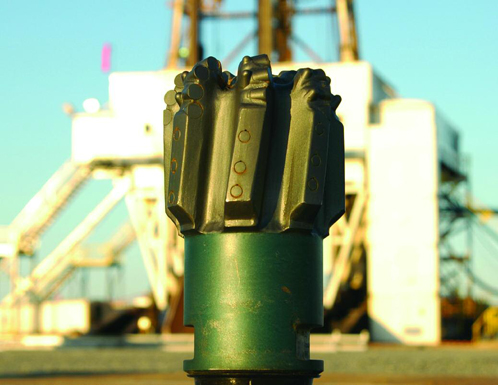 Diamond is the strongest natural material found on Earth. This drill bit is made of diamond. It is used in the oil industry to drill through rock.

Looking at the Groups

Look at the periodic table. Each column is a group of elements. They have properties that are similar. Properties are things like melting point, boiling point, hardness or softness, or whether an element is reactive or not.

The elements in Group 1, for example, are soft metals. They melt at a low temperature. When they burn, they have a colored flame. These elements also react quickly. Potassium, for example, catches fire and burns if it touches water. It is stored in oil to avoid this. 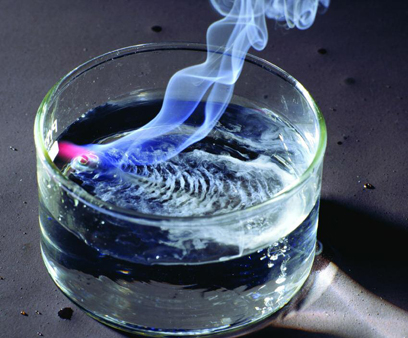 Putting the element potassium in water is dangerous. It fizzes, smokes, then starts to burn with a purple flame.

Mendeleev's periodic table was missing a whole group of elements. This was Group 18. (Look at the periodic table.) The elements of this group are very different from those in Group 1. They are colorless gases. They do not react with other elements. These are the noble gases. When Mendeleev created the table, none of these gases had been discovered. Since they do not react with anything, they were hard to identify.

In 1894, the Scottish chemist William Ramsay discovered the first noble gas. It was argon. Ramsay saw that it did not fit with the table's other groups. He suggested there must be a whole group of these gases. He was right. The others were discovered over the next six years. 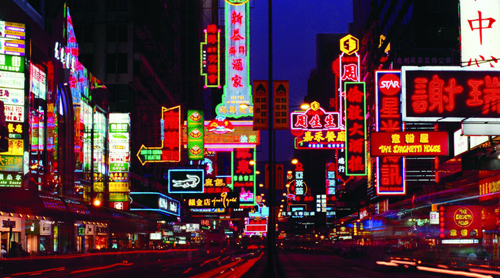 Although noble gases are colorless, they can produce very bright colors. Most of the lights in this city street have a small amount of a noble gas in them. When electricity passes through the gas, it glows brightly. Different noble gases produce different colors.

Ninety-two different elements are found on Earth. But the periodic table shows 118 elements. The extra elements have been made by scientists in the laboratory. Some may exist for only a moment.