More and More Elements, Elements in the Sun, Mendeleev's Table

It took a long time for scientists to understand what elements are. Ancient Greeks such as Aristotle thought that there were only four elements—air, fire, earth, and water. For many years, most people believed these ideas. 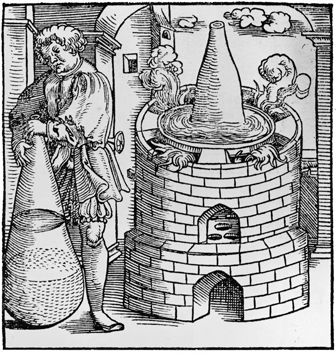 This picture from 1545 shows an alchemist at work. He is using a furnace to heat a water bath.

But then came Robert Boyle, an Irish chemist. In the 1650s, he proved that there are many elements, not just four. Then in 1789, French chemist Antoine Lavoisier made the first list of elements. The list included the elements known at the time. Among them were light and heat. We now know these are not elements. Lavoisier also defined what an element is. He said it is a substance that can not be broken down into simpler substances. 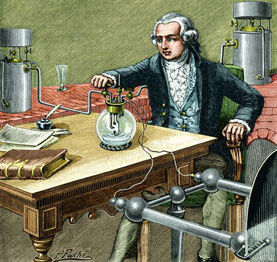 A picture of Antoine Lavoisier in his laboratory. He is doing an experiment to try and separate water into its elements.

Until the 17th century, most people who studied chemistry were alchemists. Alchemists worked with elements like today's chemists do. But they used them to try to turn one substance into another. Turning common metal into gold is one example. It didn't work, and it sounds funny now. But they made useful scientific discoveries along the way.

Lavoisier's work helped show what an element was. After that, more were discovered. Many of them were found using new methods. For example, the first battery was made in 1800. Chemists found a good use for it. They discovered that they could use electricity to separate many substances into their elements. 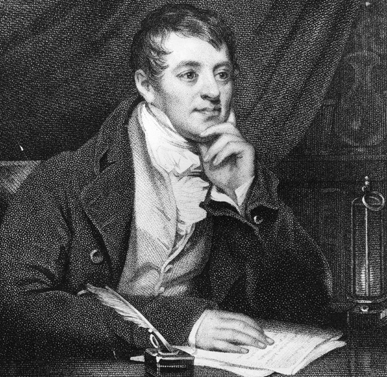 Chemists also discovered new elements by looking at the light that substances gave off as they burned. Gustave Kirchoff and Robert Bunsen were German chemists. They used a prism to split the light coming from a burning object. Then they looked at the lines that were produced (called a spectrum). The method is known as spectroscopy. Bunsen and Kirchoff discovered the elements cesium and rubidium this way. 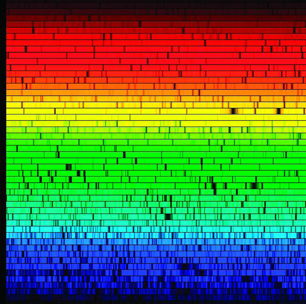 This image shows a spectrum of light coming from the star “Arcturus.” Scientists are able to tell what elements the star is made of by the position of the dark lines.

Elements in the Sun

Spectroscopy was also used to look at the light from the Sun and stars. Scientists Joseph Lockyer and Pierre Janssen did this. In 1868, they looked at the Sun's spectrum during an eclipse. They found lines for an element they did not know. The new element was called helium. Later, scientists found helium on Earth, too.

By the 1860s, chemists had named more than sixty elements. Some of these, they saw, had things in common. They had similar properties. The elements could be grouped by these. Was there a pattern to the groups? The answer came in 1869. It came from a Russian chemist Dmitri Mendeleev.

Mendeleev wrote the name of each element on a card. That way, he could rearrange them. He put the elements in order of their atomic weight. He made a few changes and grouped together elements with similar properties. 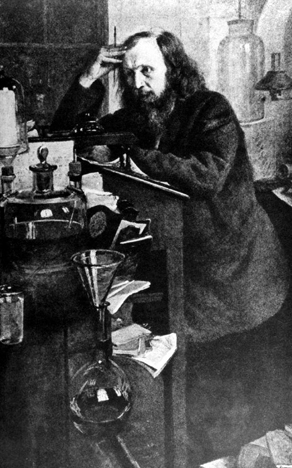 This photo shows Mendeleev working in his study.

Atoms of different elements have different masses, or weights. So how do we measure an element's atomic mass (weight)? It is the weight of a certain amount of that element compared to the weight of the same amount of another element.

Mendeleev made a table of elements showing the groups he saw. This is known as the periodic table. When he made the table, he left gaps. These marked places where Mendeleev thought an element was missing. He was sure some had not been discovered yet. He was right. Elements discovered since now fill the gaps. 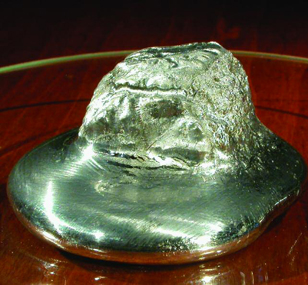 This picture shows a large lump of the chemical element, gallium. It is one of the elements that Mendeleev rightly predicted would be discovered in the future.