An American inventor built the first working solar cell in the 1880s. It was about one percent efficient. That means only one percent of the absorbed solar energy generated electricity. Since then, researchers have made solar energy production cheaper and more efficient.

Solar cars are electric vehicles. They use solar cells to convert sunlight to electricity. The electricity is stored in battery packs. A solar car looks futuristic. Many look like solar panels on wheels! That's because in order to generate enough power, a solar car's surface has to be covered with photovoltaic cells. 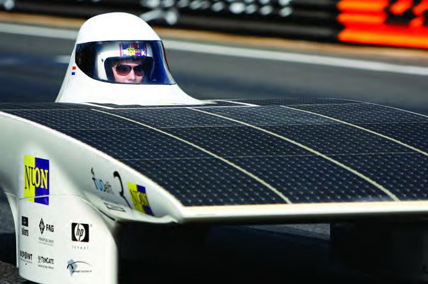 Unfortunately, solar cars are not ready to replace gas-powered vehicles. Solar cell efficiency limits their usefulness as transportation vehicles. Engineers and hobbyists build most solar cars to compete in speed and distance races around the world. To make cars as efficient as possible, they eliminate extra space and weight. The interiors usually have just enough room for a driver to squeeze in. The competitions promote solar technology and encourage builders to improve their machines.

Imagine an aircraft that could soar through the sky all day without landing to refuel. Some scientists hope that eventually solar aircraft will be able to do just that. For now, solar airplanes are experimental. Solar airplanes, like solar cars, are electric vehicles. Solar panels cover the plane's upper surface and capture sunlight. The panels convert solar energy to electricity and store it in batteries.

Helios was one of several unmanned solar aircraft built by NASA (National Aeronautics and Space Administration). Engineers designed it to fly high and to stay aloft for long periods. Operators flew and managed it by remote control from a ground station. The Helios was 247 feet (75.2 meters) from tip to tip, longer than the wingspan of a Boeing 747 jumbo jet. Helios set several flight records, including the highest flight for an unmanned aircraft. Unfortunately, it broke up during a test flight and crashed into the Pacific Ocean. 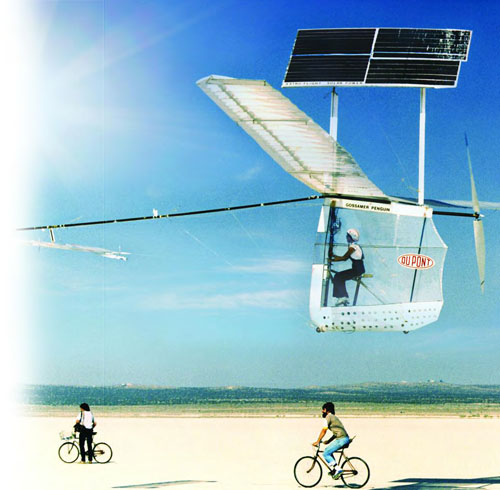 The Gossamer Penguin was the first piloted solar aircraft. It traveled just under two miles in 1980 when its pilot completed a public demonstration flight.