What makes up the Sun?

Several chemical elements make up the Sun. About 74 percent of the Sun is hydrogen gas and about 25 percent is helium gas. Other elements including oxygen make up the rest. The Sun's center, or core, is more dense, or heavier, than its outer layers. 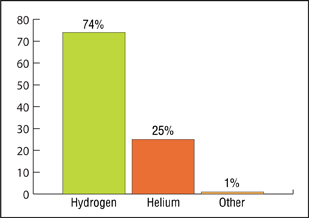 Extreme heat and pressure in the core changes hydrogen to helium. The result is a constant massive release of energy. The process is nuclear fusion.

Everything in the universe, including our Sun, is made of tiny atoms. Atoms contain even smaller particles of protons and electrons that carry an electric charge.