Tools That Extend the Senses

Observing Far Away, Types of Telescopes, Observing Close Up, How an Optical Microscope Works

We use our senses to observe everything around us. For some scientists, though, that is not enough. They rely on tools that go far beyond what their own senses can take in. 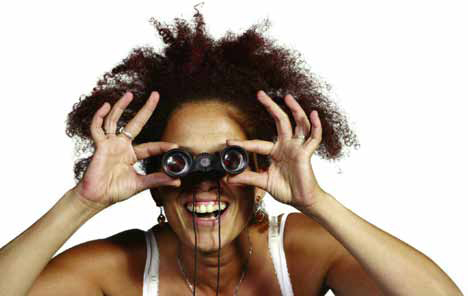 Binoculars, which are handheld, are two telescopes side-by-side.

Telescopes make distant objects such as planets and stars seem bigger and closer. The optical telescope is the most common type. Just like our eyes, this telescope makes use of light.

In the early 1600's, Dutchman Hans Lippershey probably made the first optical telescope. Nearby in Italy, Galileo Galilei built and used a similar telescope to explore the sky. 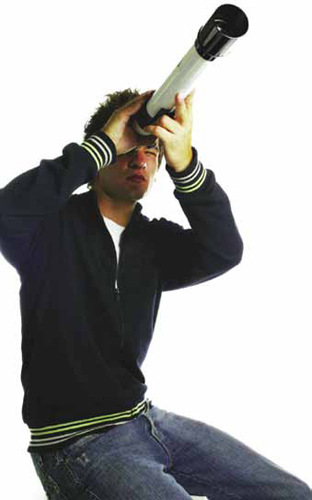 There are several types of optical telescopes. The most common is a refracting telescope. It has a long tube-like shape. At one end is a large curved piece of glass, called an objective lens. It collects light waves from distant objects. The lens works by slowing down the light waves passing through it. These waves take longer to go through its thick middle. As a result, all the different light waves reach the same point on the far side of the lens at the same time. This point is the focus and a detailed image forms.

A refracting telescope also has a small lens in the eyepiece. It allows the user to see the image even more clearly. 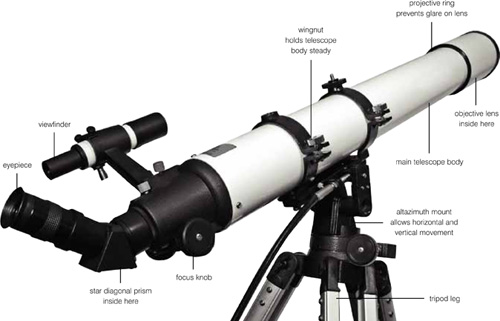 The objective lens in a refracting telescope has a convex shape. Its curve looks like the outside of a sphere.

The English scientist Isaac Newton was first to build a telescope with a mirror instead of a lens. The year was 1668. Today, most large telescopes use mirrors.

This type of optical telescope is a reflecting telescope. The main mirror has a bowl shape. It reflects all the light waves that hit it. The mirror's shape forces the various waves to reach the same focus point at the same time. A smaller mirror reflects the waves again to an eyepiece, or to an image-making device. 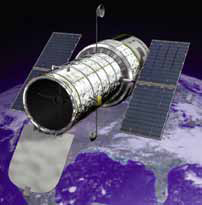 The Hubble Space Telescope is a powerful reflecting telescope that orbits the Earth. The images it forms are highly detailed. They are sharper than images coming from telescopes on the ground.

Other types of telescopes pick up different waves from objects in space. Such waves include radio, ultraviolet, and infrared waves—even x-rays. 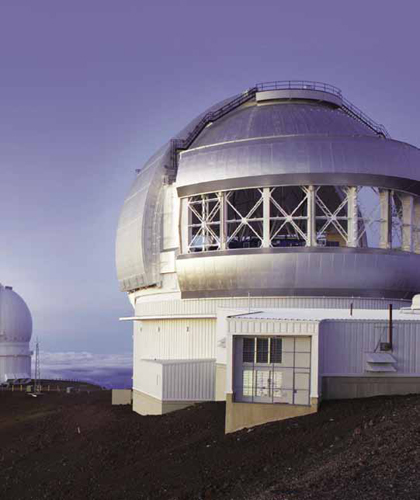 The Keck Observatory is 8 stories tall and weights 300 tons!

A magnifying glass is a lens that makes objects look bigger than they really are. But it can only enlarge something 10 to 20 times (10x to 20x). Microscopes, on the other hand, can make objects look hundreds or thousands of times larger. The optical, or light, microscope is the most common type. 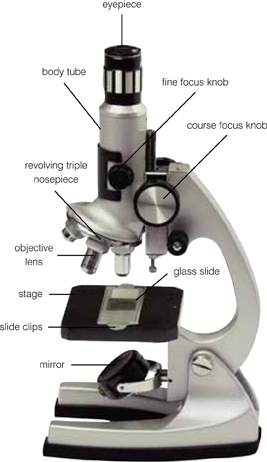 How an Optical Microscope Works

Some optical microscopes do not gather light all at once. Instead, they scan the specimen with a laser beam, spot by spot. A special device measures the light coming from each spot. A computer then uses this data to display an image on the monitor.

One type of scanning microscope scans different depths of a specimen. The computer turns these differences into a three-dimensional image. The user can view it from any angle.

To magnify a specimen even more, scientists often use an electron microscope. It forms images by using tiny electron beams rather than light waves. Some electron microscopes show detail less than one angstrom apart. An angstrom equals 1/10,000,000 millimeter (1/254,000,000 inch). 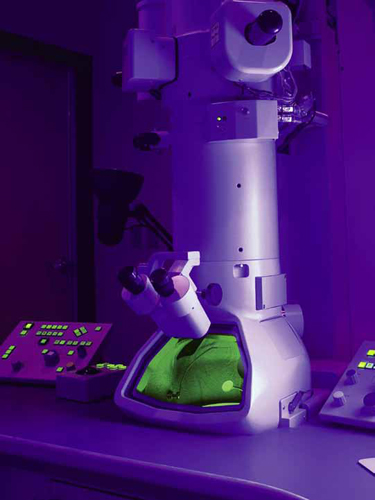 This electron microscope's beams are less than one angstrom in length. They are about 4,000 times smaller than the shortest visible light waves.

An electron microscope reveals amazing detail in this tiny ant.

Today's high-powered optical microscopes magnify a specimen up to 2,000 times. The earliest single-lens microscopes, made by Dutch scientist Anton van Leeuwenhoek, magnified no more than 270 times.

Scientists who want to record what they see and hear use many devices. A camcorder is a commonly used tool for recording picture and sound together. This battery-powered machine has a built-in microphone. Some camcorders record onto magnetic tape. Newer models use memory cards.

Memory cards are ideal to store images from a small camera.

Many other types of recording devices are in use today. High-speed cameras, for instance, let researchers observe various processes in slow motion. Other cameras allow scientists to shoot unnoticed at night. Still others operate deep in the ocean. 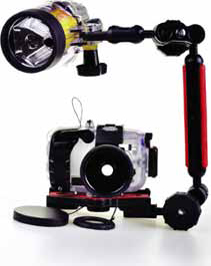 Underwater cameras must be completely waterproof.

Medical doctors use machines that send ultrasound waves into the body. These sound waves are so high-pitched that human ears can't hear them. An ultrasound machine converts the echoes of these fast vibrating waves into an image. Using this technique, a doctor can see a fetus inside a mother's womb.