A potato chip bag is useful for holding potato chips. Once you eat the chips, you will throw away the bag. The things you throw away are garbage.

Most garbage is solid. This includes things such as plastic containers or the remains of a sandwich. Garbage can also be a liquid, such as oil. Sometimes garbage may even be a gas. 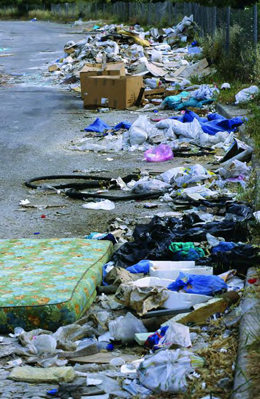 Garbage left lying around attracts disease-carrying animals such as rats. 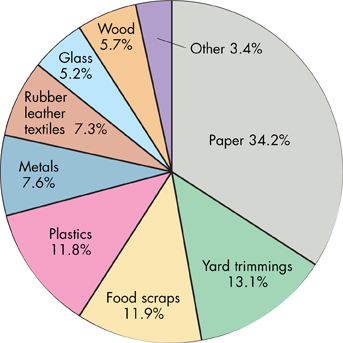 HOW MUCH GARBAGE? This chart shows the amount of garbage produced in the United States in 2005.

Some waste can be poisonous. This is called hazardous waste. It needs to be disposed of with care.

At school, at home, and at work, we all use lots of things. We eat many types of food. The more we use, the more garbage we create. Scientists predict that over the next few years, each American will continue to create about 4.5 pounds of trash—every day! New York City creates enough garbage each day to fill the Empire State Building. 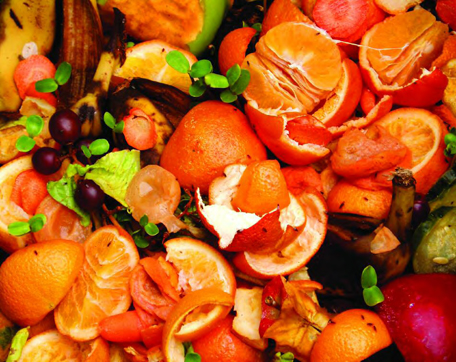 Flies have already begun the process of decomposition here.

What is the difference between natural, organic material and human-made material? Take a potato and a plastic bag, for example. The potato rots quickly. The plastic bag takes hundreds of years.

To Rot or Not?

Leaves from trees or banana skins are natural, organic materials. They are biodegradable. This means that in time they will rot. Nature's own recycling team helps speed up the process. Human-made objects, such as computers, are made from manufactured materials. Some take a very long time to break down. Others will not decompose. When a computer stops working, then, how do we get rid of it?

Many things we use today are meant to last. They are made from materials that are hard to break down. For instance, it is important that materials such as concrete last for a long time—otherwise houses would crumble. 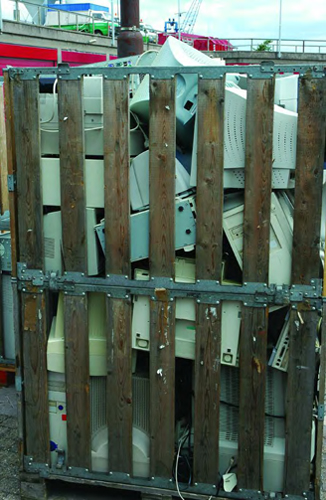 Computers contain some toxic materials. Dumping them is dangerous, so now companies can recycle them. They break up the computers and make them into new ones.

What Happens to Garbage?

A garbage crew takes away your trash. Much of the garbage is taken to a landfill site. This is a huge hole in the ground. There, bulldozers flatten piles of garbage. Eventually the squashed garbage is covered with layers of soil.

Landfill sites have problems. For example: 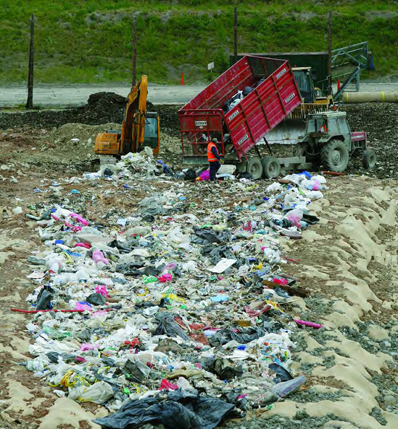 Most of the trash in trash cans ends up in huge piles on landfill sites. 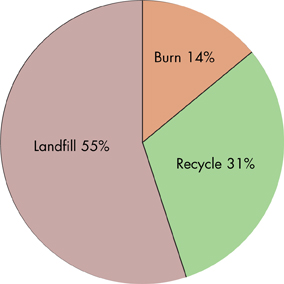 WHAT HAPPENS TO OUR TRASH? This chart shows what happens to the garbage produced in the United States.

Some garbage is burned in large incinerators. However, burning garbage can release poisonous gases into the air. Dumping waste in the sea releases poisons into the water.

And there is the danger of garbage in the environment. For example, a plastic bag floating in a river looks ugly, but it can also be deadly. Wildlife can get tangled in a plastic bag. If litter is left around, animals may eat it, and this can kill them.

Kitchen and garden waste can be used to make healthy soil. See pages 28-29. Some garbage goes in special bins and is recycled. Find out more on page 32.