Rocks may be speckled or solid-colored, bumpy or smooth, dense or filled with holes. A rock's look has a lot to do with its mineral make-up. But, just as important is how the rock formed. There are three types of rock formations. One type forms when melted rock cools and hardens. A second type consists of layers of small particles. The third rock type forms under intense heat and pressure.

Rock Formed by Cooling and Hardening

One type of rock gets its start deep in the Earth in huge underground pockets. There, the rock is so hot that it melts. This molten rock, called magma, is like a soup of different minerals and elements.

Because magma is less dense (and lighter in weight) than the solid rock around it, it flows upward. As it rises to the surface, Earth's temperature gets lower. The magma cools and hardens. The result is igneous rock. 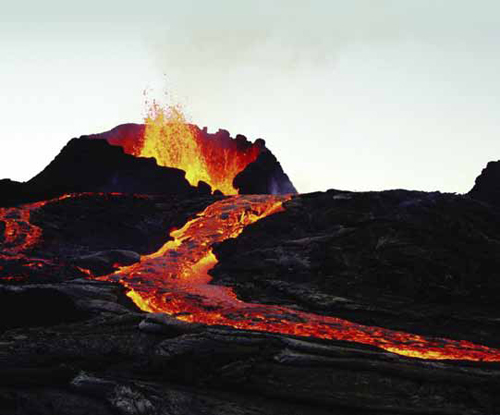 Magma often flows up through deep cracks in the solid rock already there. Sometimes it spreads out between layers of older rock. Sometimes it cuts across different layers, pushing against the rock as it moves. This magma eventually settles below ground to cool and harden.

Underground, or intrusive, igneous rock forms very slowly. It cools and hardens over tens of thousands of years. During this period, the rock's minerals have a long time to form crystals, or crystallize. Often these crystals grow large enough to see. 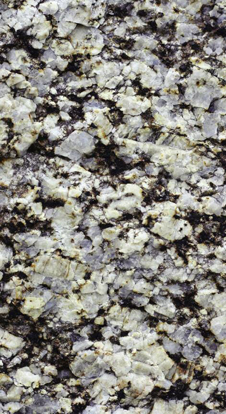 Granite is an example of an intrusive igneous rock. 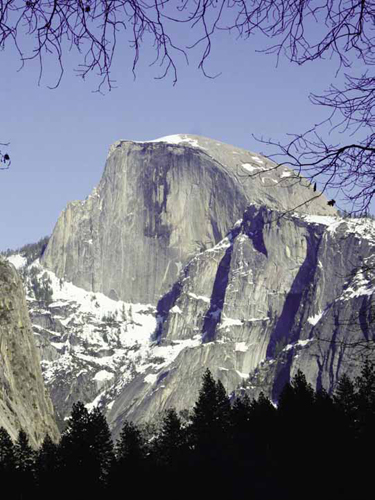 Hot magma also rises to the Earth's surface. It often pushes up through long, open pipelines in solid rock. These cone-like mountains, called volcanoes, build up in size as more and more magma flows out.

When magma meets the air and hardens, it forms extrusive igneous rock. It hardens very quickly. In other words, all of its minerals crystallize rapidly. As a result, they are very small. 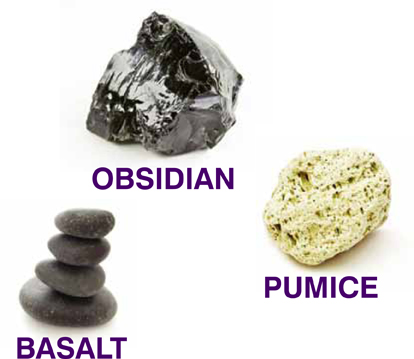 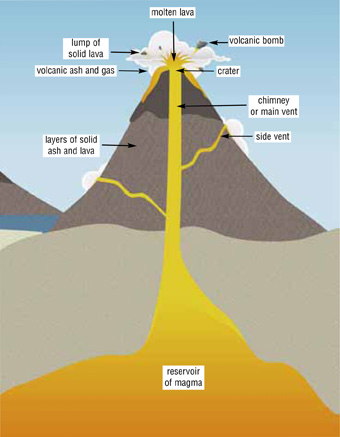 Lava is another name for magma that flows from volcanic vents. Ash, cinders, and gas also spew from volcanoes

Hardening magma is only one way that rock forms. A second type of rock forms from layers of small particles, called sediments. Most sediments consist of tiny bits of rock. The loose fragments come from larger, older rocks.

Although solid rocks may seem never-changing, tiny rock fragments come off all the time. Sometimes rain loosens the surface of a rock. Sometimes water that freezes, then thaws, cracks open rocks and loosens particles. The tiny fragments may fall down slopes and settle. Running water and wind may also carry particles away. This process, known as weathering, takes place everywhere on Earth. 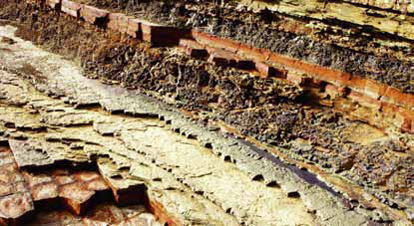 Over millions of years, rivers can create canyons by eroding layer upon layer of rock.

These particles may be carried great distances. They may end up in a sea, a lakebed, or even on dry land. There, the sediments settle layer after layer. 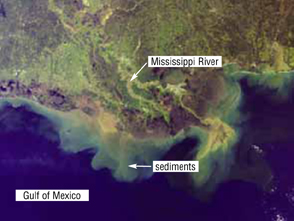 Everyday, the Mississippi River deposits thousands of tons of sediments when it reaches the Gulf of Mexico.

Sediments also come from other sources, such as organic matter. In seawater, countless tiny shells and skeletons may form layers on the bottom. In swamps, decaying plants slowly build up.

Certain minerals dissolved in a body of water can form sediments, too. The process starts as the water slowly evaporates. Over time, less and less water remains to mix with the minerals. The excess minerals start grouping together to form crystals. These crystals slowly build up. 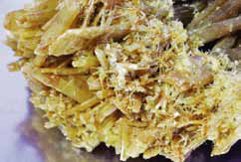 Evaporation caused Gypsum like this to crystallize in large, thick mineral beds.

Whatever the sediment, its deposits form thousands upon thousands of layers. As new layers settle on top, they bury lower layers deeper down in the earth. The weight of the upper layers squeezes the lower layers together. Moisture in the deepest layers causes certain minerals to grow. As they do, they cement all the sediments together. The result is sedimentary rock. The process takes hundreds of thousands of years. 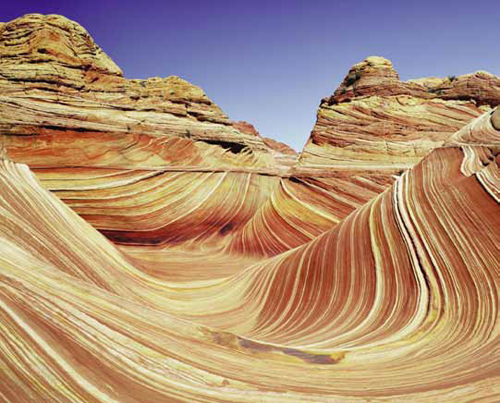 The Wave is a sandstone formation on the slopes of Arizona's Coyote Buttes.

conglomerate sedimentary rock (mix of pebbles with mud or sand)

Rock Formed By Heat and Pressure

A third type of rock forms when heat and/or pressure change old, solid rock. This happens far below Earth's surface. There, extreme conditions may cause a rock's minerals to break apart and form new crystals. Or, various minerals in the rock may come together to form new minerals. Metamorphic rock is the result of this process. 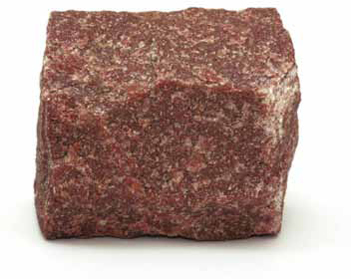 Sometimes gases are present when metamorphic rock forms. These gases may add new elements to combine with the rock's minerals. Their interaction can create new minerals.

Often huge masses of deeply buried rock change into metamorphic rock. But small areas can change, too. This happens when flowing magma touches the solid rock around it. The intense heat causes the old rock's minerals to re-crystallize.