Matter is all the stuff around us that is made from atoms and molecules. There are millions and millions of different types of matter. They are known as materials.

Since humans first existed, we have been using materials to make our lives easier. The earliest people made tools and machines from stone. This was the Stone Age. After that came the Bronze Age and the Iron Age, when humans learned to use metals. More recently, we have learned to make new materials, such as plastics. 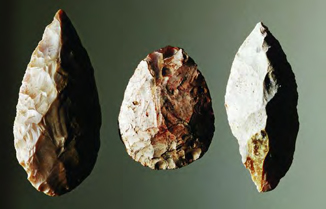 These axe heads and arrowheads were carved about 9,000 years ago, during the Stone Age. 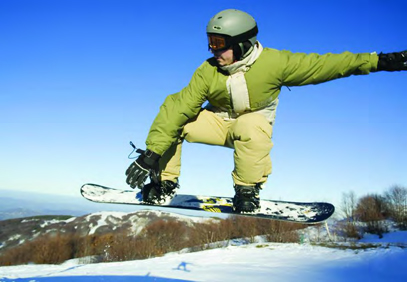 Modern materials such as plastics and carbon fiber are used to make sports gear, like this snowboard and helmet.

Several words are used to describe matter and materials. This is what they mean:

Matter: The stuff from which everything is made.

Material: Any type of matter.

Element: A material that is the same throughout, such as gold or silver.

Compound: A substance made of molecules, each of which is made up of two or more different types of atoms. Salt (sodium chloride) is a compound.

Mixture: A material made of different substances mixed together. Air is a mixture of oxygen, nitrogen, and other gases.

Different materials have different features and ways of behaving. These are called properties. For example, steel is hard. Wool is soft.

Other properties include how strong, stretchy, or flexible (bendy) a material is. What color is it? Is it see-through? Does it float? Does it burn easily? Does it feel warm or cold to touch? Does it conduct (carry) electricity?

Properties decide how a material is used. For example, a screwdriver has to be strong and hard, so it has a steel tip. But its handle must be easy to grip. So it is made of plastic, wood, or rubber. Concrete is heavy and strong. It works well for building houses but would be useless for making pants.

Many materials can be a solid, a liquid, or a gas, depending on the temperature. For example, water is often a liquid. But below 32°F (0°C), it freezes solid. It becomes ice. Above 212°F (100°C), water boils. It becomes an invisible gas. Solid, liquid, and gas are called the three states of matter. 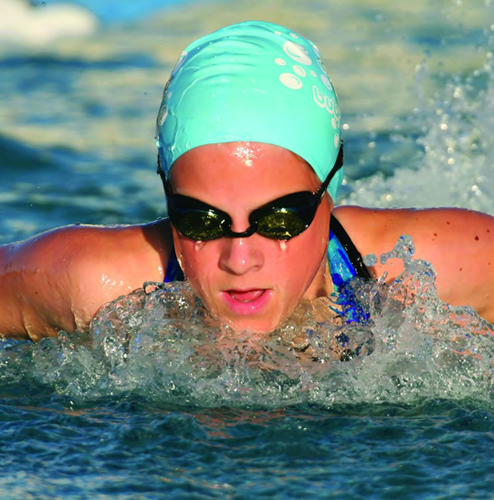 Swimming goggles are made of materials that help them to do their job. The clear plastic lenses let you see through them. The flexible rubber edges and strap hug your head closely.

Scientists can now make materials that never existed before. The first plastics, made from plants or oil, were invented in the 1800s. More recent inventions include Teflon nonstick coating for pans, and stretchy fabrics such as Lycra. Kevlar is a super-strong material. It is used to make bulletproof vests and space gear. 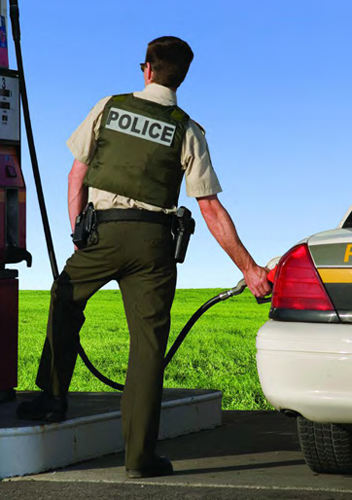 A bulletproof vest made using Kevlar can stop bullets in the space of just two inches.

If an atom is split open, it releases energy. This is called nuclear fission. Nuclear power comes from nuclear fission. Unfortunately, this invention has brought problems. It creates dangerous waste. It can also be used to make very powerful nuclear weapons. 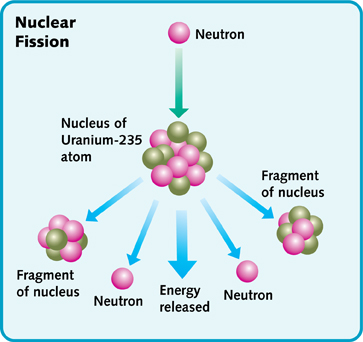 In nuclear fission, an atom is broken apart. It releases energy and particles. Some of the particles then split open other atoms.

We use materials to make things. We also turn them into useful energy. For example, we burn wood to make heat. Fuel made from oil powers cars and planes. Power stations burn coal, oil, or gas to produce electricity. 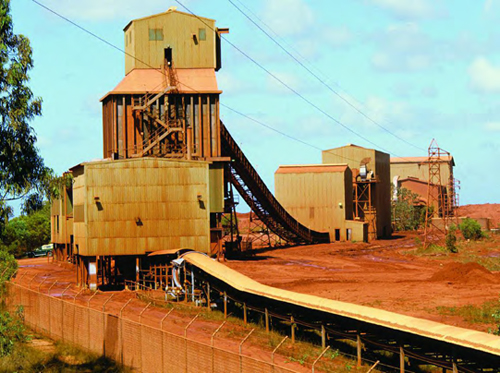 We mine many materials from the ground. Here, a conveyor belt takes a special clay called bauxite from a mine in Australia to a nearby smelter. Aluminum is removed from the heated clay.

We get materials such as rock, oil, wood, metal, and precious stones from nature. But Earth does not have an endless supply of these materials. Some of them are being used up.

Collecting materials can damage the planet, too. For example, we dig under the seabed for oil. This breaks up the seabed, and can kill sea creatures. Chopping down trees for wood destroys forest habitats where animals live.

Many molecules can be synthesized. This means scientists can make them in the lab. For example, aspirin (see page 26) was first discovered in tree bark, but we do not get it from trees anymore. Most aspirin is synthesized instead.

Chemists and physicists are scientists who study matter. They try to find out how atoms and molecules work, how they bond, and how they behave. This helps scientists invent and produce materials. It also helps us understand the universe and where matter came from. 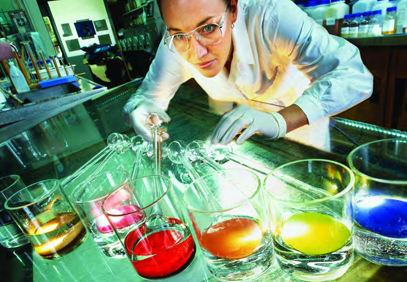 A scientist prepares jars of different chemicals for an experiment.