All the Same, What's in Water?, Molecule Patterns, Showing Molecules, Pictures of Molecules

Atoms join together to form molecules. Materials are made of molecules.

In an element, the same types of atoms join together to make molecules. Oxygen is an element. An oxygen molecule is made of two oxygen atoms that are joined together.

Water is made of two different types of atoms—oxygen and hydrogen. They join together to make water molecules. Each water molecule has three atoms in it. There are two hydrogen atoms and one oxygen atom. 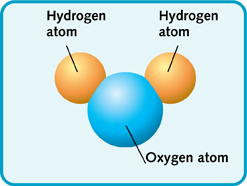 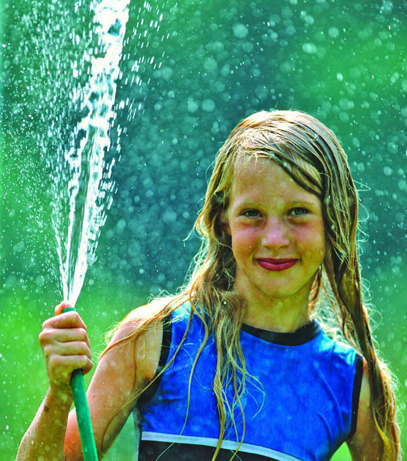 Water is water because of the pattern of atoms in its molecules. The pattern remains the same.

There are many different types of molecules. Each type has its own number of atoms and pattern of atoms. The molecules of one type are all the same.

For example, water molecules are all the same. They all have two hydrogen atoms and one oxygen atom. The atoms must be joined this way to make a water molecule.

Like atoms, most molecules are much too small for us to see on their own. But we can draw diagrams and make models of them. This helps us to understand how the atoms are arranged and joined together.

On a flat page or computer screen, molecules are shown as diagrams. Sometimes, the diagrams show atoms joined together. They look like balls stuck to one other. 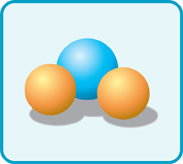 This diagram shows atoms as balls. This is a water molecule.

Other diagrams show the atoms as balls joined together with sticks.

Scientists can also build model molecules. Then they use real-life balls and sticks. The balls stand for atoms. The sticks fix them together to make molecules.

This is a ball-and-stick diagram of a water molecule (H20).

As you know, each atom has its own code name. For example, the code name for oxygen is O.

Scientists can also use code names, or formulas, to name whole molecules. For example, water is made of two hydrogen atoms and one oxygen atom. The chemical formula for this molecule looks like this: 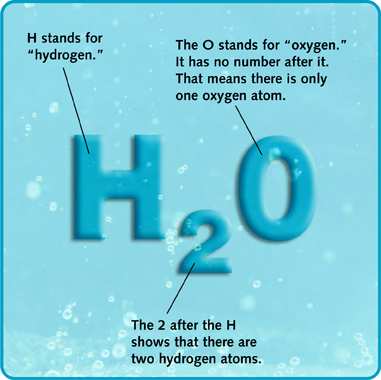 As you know, there are about one hundred types of atoms. This number has changed as scientists have discovered new elements.

The elements can be arranged in all kinds of patterns. Each different pattern makes a different molecule. In fact, there are millions of types of molecules.

We have read that molecules can be different sizes. Some molecules are small. A water molecule (H2O) has just three atoms. An oxygen molecule (O2) has just two.

Other molecules are much bigger. They can have dozens or hundreds of atoms. For example, carbon atoms can form big molecules. These molecules are called buckyballs. Each buckyball contains sixty carbon atoms. They are joined together in a sphere. It looks like a ball. 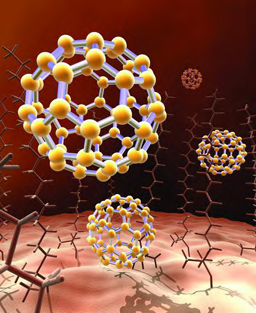 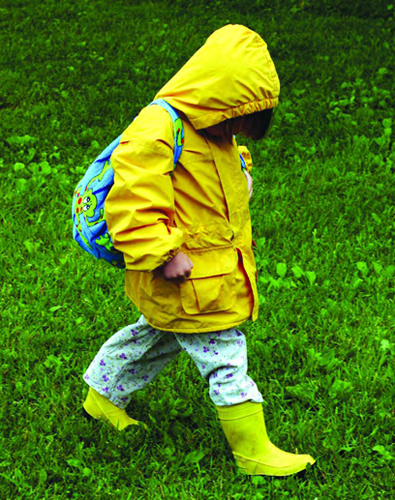 Plastics, such as those used to make waterproof coats and boots, contain polymer molecules.

Some molecules are like chains. More and more atoms can be added. They make a pattern that repeats over and over. These “chain” molecules are called polymers. Plastics are made of polymer molecules.

Molecules are in everything. They are all around us, all the time. Most molecules simply make up materials, but some have amazingly useful jobs.

DNA is short for “deoxyribonucleic acid.” This is a very important molecule. It is found inside living things. It is a chain molecule, or polymer. The atoms are arranged in patterns along the DNA chain. These patterns of atoms act as instructions for living things. They tell them how to live and grow.

A diagram of part of a DNA molecule chain.

Many medicines work because of the shape of their molecules. For example, aspirin is a painkiller. Aspirin molecules can lock onto a body chemical that makes pain signals. They can lock together because their shapes fit together. This blocks the signals, and the pain stops.

In 1953, scientists James Watson and Francis Crick made a great discovery. They figured out the shape of DNA. They used balls and sticks to build a model of the DNA molecule. 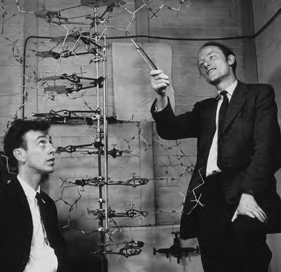 Besides buckyballs, carbon atoms can form carbon nanotubes. These molecules are shaped like long tubes. They are light, flexible, and amazingly strong. They are up to one hundred times stronger then steel.