Look at this picture of Earth. You can see the continent of Africa. The rest of what you see is water in the form of oceans, clouds, and ice. 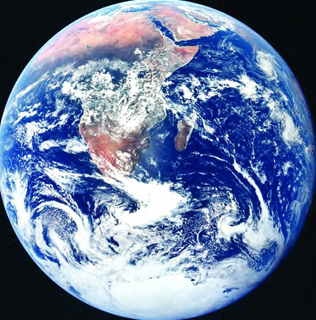 There is ice around the poles because it is very cold there. Ice is solid water. It is the same material as liquid water, but it has different properties because it is a solid.

The air around Earth is a gas. It contains water vapor. This is water that has become a gas. We cannot see water vapor.

We can describe all the things around us as solids, liquids, or gases. Each kind of material has different properties. 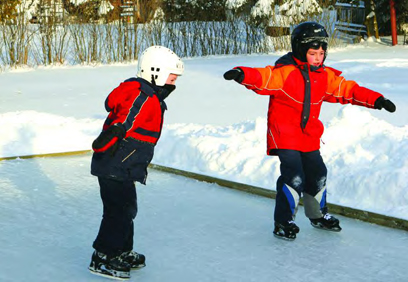 Ice is a solid material.

Ice, liquid water, and water vapor are three different states of water. You can change water from one state to another by changing the temperature.

If you heat ice, it turns into liquid water. This is called melting. Melting happens when the temperature is 32°F (0°C) or higher. This is the melting point of water.

If you cool liquid water to 32°F (0°C) or lower, it becomes solid. This is called freezing. The melting and freezing points of a material are the same temperature. 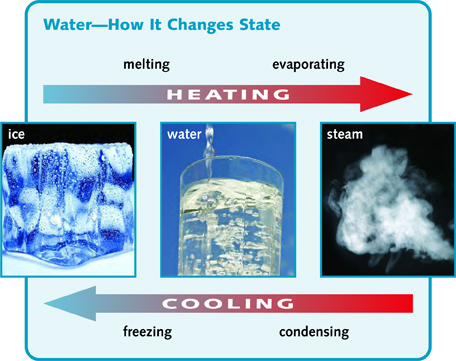 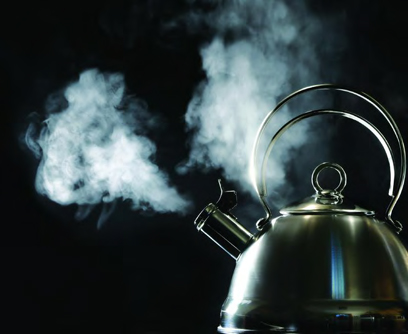 Steam is an invisible gas. You cannot see steam. What you see when a kettle boils is actually tiny drops of water.

Liquid water can turn into a gas at any temperature. We say it evaporates. Evaporation happens fastest when water is heated to 212°F (100°C). This is the boiling point of water. When water is boiling, we call the hot water vapor steam.

When steam or water vapor cools down, it turns back to liquid water. This is called condensing.