The History of the Global Positioning System

We live in a time when technology is rapidly changing. It wasn't so long ago that preparing for a trip meant making sure you had updated versions of the right maps. If you got lost, there was no such thing as a cell phone. You'd need to pull over and ask directions or find a pay phone and call for help. So how did the Global Positioning System come about?

In the 1960s, United States military branches worked on developing radio navigation systems. In 1973, the Air Force took all the information and put it together into a single program called the NAVSTAR (Navigation Signal Timing and Ranging) Global Positioning System.

The military was interested in using NAVSTAR GPS for navigation, but also for guiding weapons. Because the military didn't want an enemy to use GPS technology against us, non-military units were made less accurate.

The first NAVSTAR satellite was launched in 1974, and the system was in operation by the mid 1980s. All 24 satellites were orbiting Earth by 1994.

GPS technology was first developed for military use. Civilians could use the system, but the information they received was not as accurate as the military's. This was due to something called Selective Availability (SA). We could use our GPS units to find our location, but only within a little over 300 feet (about 100 meters) of our actual location. The information military users could get was much more accurate. 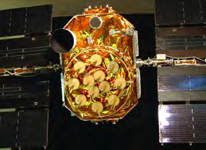 In May 2000, Selective Availability was turned off. Suddenly, even civilian users could enjoy accuracy within about 50 feet (15 meters).

Dr. Ivan Getting, President and CEO of The Aerospace Corporation, came up with the idea of the Global Positioning System and worked for years to make his dream a reality.

Satellite GPS 2R-11 is fitted with an engraved plate honoring Dr. Getting, who died in 2003.

Reprinted with permission of The Aerospace Corporation