Apple's iOS is an operating system (OS) designed for use on Apple's mobile devices, including the iPhone, iPad, Apple TV, and iPod Touch. In 2016, iOS was the world's second most popular mobile OS after the Android OS. Introduced in 2007, iOS was one of the first mobile OSs to incorporate a capacitive touchscreen system. The touch screen allows users to activate functions by touching the screen with their fingers. The Apple iOS was also among the first mobile OSs to give users the ability to download applications (apps) to their mobile devices. The iOS is therefore a platform for hundreds of thousands third-party apps.

The first iOS system and iPhone were unveiled at the 2007 Macworld Conference. The original iOS had a number of limitations. For example, it was unable to run third-party apps, had no copy and paste functions, and could not send e-mail attachments. It was also not designed for multitasking, forcing users to wait for each process to finish before beginning another. However, iOS introduced a sophisticated capacitive touch screen. The iOS touch features allowed users to activate most functions with their fingers rather than needing a stylus or buttons on the device. The original iPhone had only five physical buttons. All other functions, including the keyboard, were integrated into the device's touch screen. In addition, the iOS system supports multitouch gestures. This allows a user to use two or more fingers (pressure points) to activate additional functions. Examples include “pinching” and “stretching” to shrink or expand an image.

The second version of iOS was launched in July 2008. With iOS 2, Apple introduced the App Store, where users could download third-party apps and games. In 2009, iOS 3 provided support for copy and paste functions and multimedia messaging. A major advancement came with the release of iOS 4 in 2010. This update introduced the ability to multitask, allowing iOS to begin multiple tasks concurrently without waiting for one task to finish before initiating the next task in the queue. The iOS 4 release was also the first to feature a folder system in which similar apps could be grouped together on the device's home screen (called the “springboard”). FaceTime video calls also became available with iOS 4. 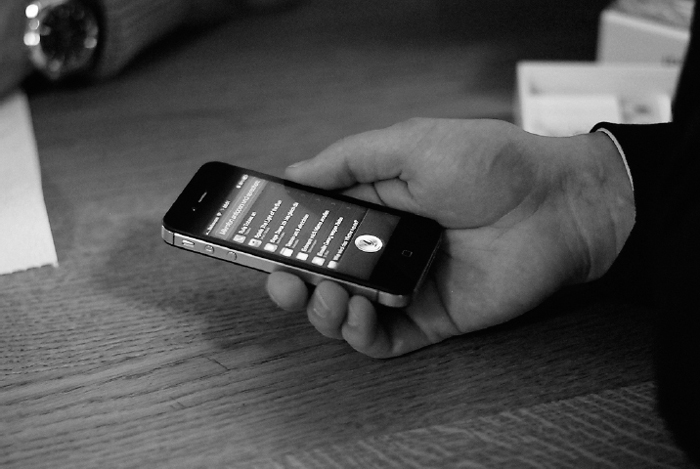 iOS integrated Siri, a voice-activated search engine, for the iPhone. Through multiple updates, its capabilities have expanded to work extremely well with a number of popular websites with all Apple apps, as well as with many popular third-party apps. Vasile Cotovanu, CC BY 2.0
(http://creativecommons.org/licenses/by/2.0), via Wikimedia Commons.

The release of iOS 5 in 2011 integrated the voice-activated virtual assistant Siri as a default app. Other iOS 5 updates include the introduction of iMessage, Reminders, and Newsstand. In 2012, iOS 6 replaced Google Maps with Apple Maps and redesigned the App Store, among other updates. Released in 2013, iOS 7 featured a new aesthetic and introduced the Control Center, AirDrop, and iTunes Radio.

With the release of iOS 8, Apple included third-party widget support for the first time in the company's history. Widgets are small programs that do not need to be opened and continuously run on a device. Examples including stock tickers and weather widgets that display current conditions based on data from the web. Widgets had been a feature of Android and Windows mobile OSs for years. However, iOS 8 was the first iOS version to support widgets for Apple. Since their release, Apple has expanded the availability of widgets for users.

The release of iOS 9 in 2015 marked a visual departure for Apple. This update debuted a new typeface for iOS called San Francisco. This specially tailored font replaced the former Helvetica Neue. The release of iOS 9 also improved the battery life of Apple devices. This update introduced a low-power mode that deactivates high-energy programs until the phone is fully charged. Low-power mode can extend battery life by as much as an hour on average.

Coinciding with the release of iOS 9, Apple also debuted the iPhone 6S and iPhone 6S Plus, which introduced 3D Touch. This new feature is built into the hardware of newer Apple devices and can sense how deeply a user is pressing on the touch screen. 3D Touch is incorporated into iOS 9 and enables previews of various functions within apps without needing to fully activate or switch to a new app. For instance, within the camera app, lightly holding a finger over a photo icon will bring up an enlarged preview without needing to open the iPhoto app.